Putin: Democrats Are ‘Sore Losers’ Who Need to Learn How to ‘Lose With Dignity’
video

Putin: Democrats Are ‘Sore Losers’ Who Need to Learn How to ‘Lose With Dignity’ 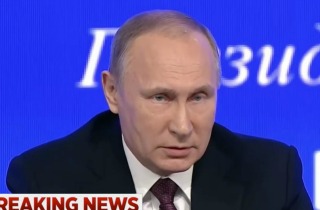 Vladimir Putin held a news conference in Moscow today, where he offered new praise to President-Elect Donald Trump and took shots at those who have accused the Russian president of meddling with the 2016 election.

Putin and Trump’s friendly relationship has been well established, though the Russian president has been under fire ever since multiple intelligence agencies determined that he orchestrated cyber activities to interfere with America’s politics. The Kremlin has pushed back on this in recent weeks, and today, Putin said that the Democratic Party has “forgotten the original meaning of its own name” by blaming him for Hillary Clinton‘s loss.

“[The Democrats] are losing on all fronts and looking elsewhere for things to blame,” Putin said, according to Reuters. “In my view this degrades their own dignity. You have to know how to lose with dignity.”

Putin went on to say that the most important thing to think about was that the hacking revealed genuine information about the Democratic Party, which they did not apologize for. Putin also complimented Trump for tapping into the mood of the public, while saying no one expected the mogul’s victory “except for you and me.”

During this news event, Putin was asked to respond to Trump’s call to expand America’s nuclear capabilities, which has rocked the political world since Thursday afternoon. Putin shrugged off the concern that Trump caused, as well as the indications that the comments were made in response to what he said about Russia’s need to modernize its military powers.

BREAKING: Putin responds to Trump’s nukes tweet: If arms race speeds up, ‘it’s not us’ https://t.co/bYYFmeLKi9