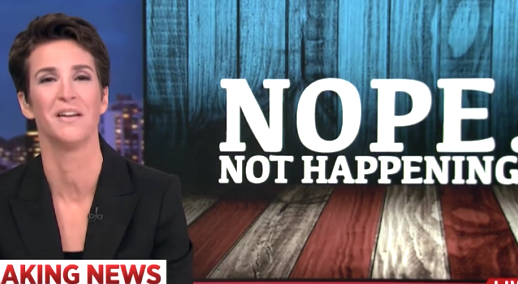 Rachel Maddow has finally addressed criticism that she and her network oversold the Donald Trump tax return scoop.

In an interview with the Associated Press, the ratings empress of MSNBC completely absolved herself of any blame, saying that she had nothing to with with anyone whose expectations were too high.

External to what we did? …I don’t think so.

While Maddow is correct that she never explicitly suggested evidence of malfeasance, she cannot disavow her obvious attempt to over-hype the story in a way that led people to that conclusion.

Let’s look at the record.

Maddow tweeted the above claim at 7:36 p.m., nearly 90 minutes before her show was set to air. Right off the bat, this statement is grossly misleading, for as we later learned, Maddow did NOT have the full tax returns but merely a two-page 1040 form.

You don’t need to be a tax lawyer to get a sense of how incomplete a picture that draws.

Notwithstanding Trump’s well-documented love for theatrical stacks of paper, his vast corporate holdings around the world suggest that the above photo is closer to the truth than Maddow’s two-pager.

If I tweeted that I had solved the New York Times Sunday crossword puzzle, you would rightly assume I was referring to the whole puzzle not merely three and four across. (Speaking of The Times, I suddenly can’t help but remember their far more significant Trump tax scoop, which was released with virtually no prior fanfare.)

Maddow, a Rhodes Scholar, certainly must have realized her tweet was leading to wild speculation, yet she declined to issue a clarification until almost an hour later.

It’s safe to say, however, that by this point the genie was out of the bottle. Once 9:00 p.m. came around, Maddow’s decision to hide the news behind a nearly 20 minutes disquisition about the importance of taxes and Russian oligarchs only added to the insult.

The real tragedy in all of this is, as Maddow accurately pointed out to the Associated Press, her scoop was significant and newsworthy. Donald Trump was the first presidential candidate since the Watergate era to withhold his tax returns and any new information on that subject is major.

But by deliberately overselling what she had — in what was obviously a naked ratings play, Maddow provided an unintended win for the White House and damaged her credibility on this issue going forward.