Rand Paul Fires Back At Chris Christie: He’s Worried About ‘The Dangers Of Freedom’… 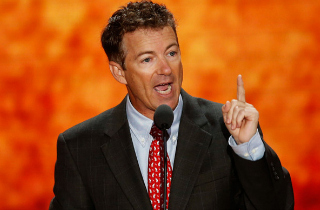 Sen. Rand Paul has fired back atChris Christie after the New Jersey governor took a swipe at him and the “dangerous” strand of libertarianism running through both parties on Thursday evening.

Christie told an audience in Aspen, Colo., on Thursday evening that Paul and other libertarian-leaning lawmakers’ skepticism of government surveillance programs and counterterrorism policies represent a “dangerous” strand of thought that would easily offend those who survived the 9/11 attacks.

In a single tweet Friday morning, Paul responded, warning that “Christie worries about the dangers of freedom” while the Senator “worr[ies] about the danger of losing that freedom. Spying without warrants is unconstitutional.”

Shots fired. Looks like you can add Chris Christie to the list of hawkish Republicans like Sens. John McCain and Lindsey Graham who find the likes of Sen. Paul and Rep. Justin Amash to be “wacko birds.”

“If Governor Christie believes the constitutional rights and the privacy of all Americans is ‘esoteric,’ he either needs a new dictionary, or he needs to talk to more Americans, because a great number of them are concerned about the dramatic overreach of our government in recent years. […] “Defending America and fighting terrorism is the concern of all Americans, especially Senator Paul. But it can and must be done in keeping with our constitution and while protecting the freedoms that make America exceptional.”