Rand Paul: The Real ‘Sexists’ Are Ones Accusing Me of Being Sexist 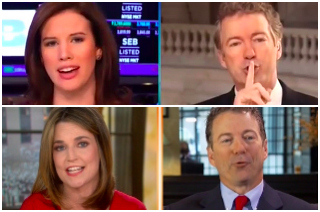 After literally shushing CNBC’s Kelly Evans and accusing the Today show’s Savannah Guthrie of “editorializing” his positions, Sen. Rand Paul (R-KY) has faced charges of sexism for the way he has interacted with female interviewers. But in a radio interview this week, Paul said those accusing him of sexism might be the real sexists.

“The kind of funny thing about it is that it’s kind of a sexist position to think that somehow women announcers are less capable to handle themselves than men,” Paul told Iowa radio host Simon Conway. “I don’t think that, but everybody that was complaining about it, thinking it had something to do with gender, basically that’s insulting to the people doing the questioning.”

“Really the problem is that we have a lot of media that are just so far on the left that we just don’t have any neutral questions,” Paul added. “If you go on there as a Democrat, they laugh and yuck it up and talk about how great things are going, but it’s a little bit different when Republicans are on the national news.”

The candidate expressed a similar sentiment earlier this month when CNN’s Dana Bash asked him if he will able to avoid getting testy with female candidates like, say, Hillary Clinton. “I would treat her with the same respect that I would treat a man, but I wouldn’t lay down and say, ‘I’m not going to respond,’” he said. “That would be a sexist sort of response, to say, ‘Oh, my goodness, she deserves to be treated as aggressively because she’s only a woman.’”

Sen. Paul’s wife Kelley Paul also came to his defense on the charges of sexism on Fox & Friends last week, saying “That label upset me.”

“That is not who Rand is, at all,” Paul said. “Professionally, personally, he is the type of person who wants to work with somebody and value their talents and ability for who they are.”

Listen to audio below, via WHO Radio: