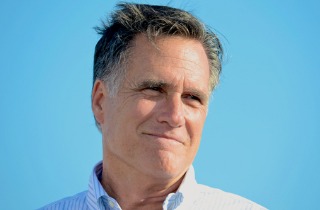 One of the many impacts of Donald Trump seemingly shattering all the normal rules of politics is that it is suddenly much more difficult to discern what is really happening behind the scenes based on news leaks. In the “olden days” (2015), reading the media tea leaves in situations like the shocking prospect of Trump offering fierce rival Mitt Romney the position of Secretary of State wouldn’t be so difficult. But now such an endeavor entails as much uncertainty as a newly blind person trying to learn braille.

Despite this reality, I am foolish enough to try.

The primary problem with doing the “math” on this situation is that we don’t even know (which is, frankly, rather scary) what Trump’s primary motivation is here. Is he earnestly trying to find the best person for the job, even if it means swallowing his legendary ego, or is this all a ruse designed to further humiliate someone who went further than anyone else in trying to stop Trump’s accession to the GOP presidential nomination?

If it is the latter, then Trump is exactly who many of us thought that he is: a megalomaniacal, narcissistic, sociopath who cares only about self-gratification as well as uniquely unqualified for the position of President of the United States. While this is, sadly, all too possible, I will presume, for the purposes of this exercise, that it is not the case.

Part of why I’m fairly certain that this was not all an elaborate practical joke, is that, if it was, his inner circle would have a least a pretty good clue about that and they wouldn’t be taking such vocal and unprecedented steps to try to sabotage a Romney selection. There would simply be no need for that and they would be risking Trump’s ire by making the process seem chaotic and putting him in a nearly no-win situation (there are those who believe that Trump is such a master of “eight-dimensional chess” manipulation that this is ALL part of his evil plan, but I simply don’t buy that narrative about him).

The conventional media “wisdom” (which is almost always wrong) seems to be that the Trump loyalists like Newt Gingrich, Kellyanne Conway, and Mike Huckabee are all publicly campaigning against Romney and in favor of fellow Trump suck-up Rudy Giuliani as a way of persuading Trump. The thinking goes that since Trump is obsessed with media coverage about himself that he will hear their pleas and rethink the idea of picking Romney.

But what if Trump isn’t their target audience? What if Romney is? These efforts, especially the very vague and thinly sourced Fox News report that some in the Trump “camp” want Romney to publicly apologize for calling Trump (correctly, in my opinion) a “phony” and a “fraud” during the campaign. To me, this smacks of Trump insiders being convinced that Trump may actually pick Romney and that convincing Romney that this wouldn’t be worth it, and that he should bail out on his own, is the most likely scenario to keep this from happening.

One of the many things at which the news media is really bad is discerning what the true motivations are of those who are giving them information. Often times these leaks are not only not true, but they are the opposite of true and are intended to create a result different from what the media perceives (here the media is often playing checkers and the leakers are indeed playing chess).

We see this all the time in the annual game of coaching musical chairs in college football. As I write this, the big story there is whether Houston coach Tom Herman will go to LSU or Texas. He is currently thought to be heading, surprisingly, to LSU, but what is really odd is that the original source of that story is a TEXAS website, and yet there has been almost no skepticism that the whole thing could be a head fake.

The Romney as secretary of state reports are extremely similar to what we often see with big-time football coaching positions. Usually, when a stunning possibility is made public with some real legitimacy there is a very short window of opportunity for that deal to get done before opposition can be mobilized and the sheer insanity of the prospect can be rethought. It feels like that is exactly what is happening right now to the Romney pick.

If Trump was really going to go through with this, it probably would have already been made official by now. After all, the shock value Trump obviously loves is wearing off while the ire of his closest supporters is clearly growing. Trump has already gotten most of the “establishment” credit (something he craves far more than his “anti-establishment” supporters realize) from simply meeting with Romney that he would get from actually picking him.

My sense is that Trump was indeed sincere in his interest in having Romney join his administration. It also seems to me that the value which Trump places on loyalty has been greatly misunderstood. While he likes having his butt kissed, it also appears that if you are too much of a sycophant (like Chris Christie and Sarah Palin) that he loses respect for you and you are eventually frozen out. Conversely, since he’s also seeking the approval of those who disdain him (thus the meeting with the New York Times), having Romney on board would be very personally satisfying to Trump.

However, as an ardent Trump critic who greatly respects Romney, I have to say that it would be very foolish politically for the president-elect to actually do this. Not because Romney wouldn’t do a good job, but because he would be handing an enemy the power to potentially bring down his presidency.

Let’s say Romney took the job and strongly disagreed with something Trump did or said. After about a year of trying, Romney would have the credibility, character, and media megaphone to call Trump out on it. Since he is old and rich, nothing would keep Romney from resigning in protest and there is no doubt that the majority of the country (and all of the press) would side with Romney under those circumstances. Trump would be effectively be handing a deadly weapon to a man with nothing to lose and who knows that he is a fraud, unworthy of the presidency. I can even see a scenario where Romney ends up running against Trump in 2020, which would currently be impossible.

This is the real reason why I think Trump, who has to be smart enough to realize this obvious danger, will reconsider and name someone else secretary of state (though maybe not Rudy). That is, unless Trump truly is playing eight-dimensional chess and actually wants Romney, whom he knows was the only prominent guy to really figure him out and who had the guts to try to stop him, to finally take him down.

As insane as that sounds, in this crazy cycle far stranger things have already happened and almost certainly will continue to do so on a fairly regular basis.