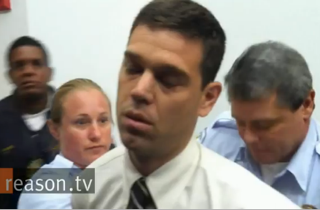 It’s a story straight out of an Amnesty International press release: during a public government meeting, two journalists were arrested for chronicling the events on camera: one for filming the meeting, and the other for filming the arrest of the first. But the most bizarre element of why Reason‘s Jim Epstein spent yesterday behind bars is that his filming landed him in a jail cell in Washington, D.C., for filming, of all things, a Taxicab Commission meeting.

The details are still nebulous, but the Washington Post recounted yesterday that journalist Pete Tucker was charged with disorderly conduct and unlawful entering and remaining for refusing to put his camera away at the public meeting:

Tucker said that he was arrested after being directed to stop photographing the meeting of the Taxicab Commission, which was held at Park Police headquarters in Southeast Washington. Tucker has been chronicling the dealings of the taxicab industry on his Web site and WUST-AM radio, including a recent proposal to create a medallion system in the city. […]

Reason.tv producer Jim Epstein was then arrested for recording Tucker’s arrest– his video shows Tucker shouting “Sir, this is a public meeting! I’m a reporter!” while being handcuffed, while dozens of taxi drivers attending the meeting leave in protest of his arrest. Epstein, now out of custody, posted the video that got him in trouble with the police today and gave a short account of his experience, promising more in the upcoming days. Epstein was working on a story about the proposed medallion system and, being a journalist, found Tucker’s arrest for taking a photo of the public event newsworthy enough to film. He notes that he was permitted to film for several minutes until he wrapped up and attempted to leave:

A few minutes later, as I was attempting to leave the building, I overheard the female officer who had arrested Tucker promise a woman, who I presumed to be an employee of the Taxi Commission, that she would confiscate my phone. Reason intern Kyle Blaine, overheard her say, “Do you want his phone? I can get his phone.”

(The woman who was given assurances by the officer that she could have my phone can be seen at the end of the video telling me, “You do not have permission to record this!”)

As I tried to leave, I was told by the same officer to “stay put.” I told her I was leaving and attempted to exit the building. I was then surrounded by officers, and told to remain still or I would be arrested.

The charges upon which Epstein was detained are still nebulous, though likely fall under similar “disorderly conduct” grounds. Given that the story has just broken and Epstein promised more information– as well as the fact that law enforcement have remained relatively quiet on the matter– it is difficult to tell what exactly led police to arrest the journalists at a public meeting for such an apparently innocuous (and boring) issue as the regulation of D.C.’s taxicabs.

Taken at face value, however– journalists being arrested for photographing a public government meeting where there were no apparent signs of such behavior breaking the law– Epstein and Tucker likely have a strong First and Fourth Amendment case to make in court against what appears to be a truly outrageous abuse of power against the free press. Sure, the story may not have the hype surrounding, say, the detention of a CBS reporter for asking Anthony Weiner a question (after all, who wants to read about the D.C. Taxi Commission?). But the precedent set by permitting local police to arrest journalists in our nation’s capital for committing lawful acts of journalism, especially considering the current political climate where the “mainstream media” is perceived in many circles as a nefarious tool of oppression, presents a very serious threat to First Amendment rights as we know them.

That said, as mentioned above, law enforcement officials have yet to comment on the matter, and the only evidence of what happened in that room yesterday is a five-minute tape of mostly civil disobedience. Without the other side of the story– as other noteworthy arrests taught us— coming to a wise conclusion on what should have happened is impossible.

The video Epstein took of Tucker’s arrest (via Reason) below: