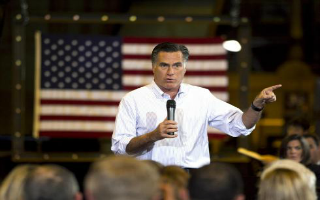 Mitt Romney‘s presidential campaign has recently embraced a series of tactics that are aimed at harassing President Barack Obama campaign staff and supporters and disrupting their events. For the most part, these tactics have been successful, but they are boorish and unbecoming of a potential President of the United States. The Romney campaign would do well to rethink this tactic. If this tactic is not repudiated, the dangerous implications that could stretch well beyond 2012.

While Republican presidential candidate Mitt Romney and President Barack Obama spent the day in Ohio yesterday delivering dueling speeches, the Romney campaign bus managed to make a stop at an Obama event where they spent a fair bit of time honking at and harassing the President’s supporters.

When reporters asked the Obama campaign for comment, a spokesperson told Talking Points Memo, “the American people deserve better than antics that are more at home in a second grade classroom than in a presidential campaign.”

And they are absolutely correct. But this is not the first example of the Romney campaign embracing disruption politics.

One particularly effective episode occurred on May 31 – when the Romney camp shipped a group of hecklers to drown out senior Obama campaign advisor David Axelrod as he spoke to supporters in Massachusetts.

Axelrod was giving a speech that would highlight the Obama team’s rollout of an anti-Romney ad that took him to task for his record as governor of the Bay State. That ad never quite made the splash that was intended for it because the story of the day quickly became “Axelrod booed by hecklers.”

Mitt Romney himself all but confirmed that this was campaign-directed initiative:

“[A]t some point, you say, you know, ‘what’s sauce for the goose is sauce for the gander,'” Romney told reporters in May. “If they are going to be heckling us, why, we’re not going to sit back and play by very different rules. If the President is going to have his people coming to my rallies and heckling, why, we’ll show them that, you know, we conservatives have the same kind of capacity he does.”

That’s just fine – everyone is entitled to goose sauce. But there is no evidence that the Obama campaign has engaged in tactics remotely similar to those of Romney. Even if there was a parallel, that would not justify the Romney campaign’s schoolyard bully behavior.

Republicans remember all too well the presidential campaign of John McCain that appeared to eschew the rough and tumble tactics of modern politics and how they were rewarded for their nobility. Many, I’d venture to say most Republicans, are happy that the Romney campaign appears eager to take the fight to Obama. Indeed, the Romney campaign’s state of perpetual offense is refreshing.

However, they would do well to mind their brand. These tactics — sending hecklers and honking busses to harass Obama’s supporters — is not beneath a potential President. If it becomes a trend, the Romney camp could turn swing voters off.

Furthermore, they risk setting a dangerous precedent if their harassment tactics are effective – what campaign wouldn’t budget in a “harassment director” if Romney is victorious in November after having made this harassment a central tactic in a broader campaigns strategy? That kind of Weimar-era, political haranguing should be avoided if only for the sake of national comity.

These tactics may be effective, but at what cost? The Romney campaign has a responsibility to history and they should be wary of it – their harassment tactics are an affront to American political tradition.