Mitt Romney: ‘I Have Never Paid Less Than 13%’ In Taxes In Last 10 Years
video 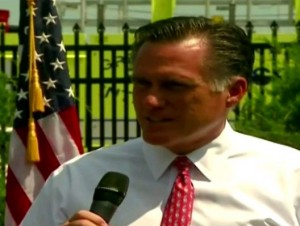 The tax issue has been perpetually hounding Mitt Romney this campaign cycle, and speaking to reporters on Thursday, Romney responded to it. Not by saying he’d release any returns, as many have been urging, but by giving us a number to work with. “I have never paid less than 13 percent” in taxes in the last 10 years, he said.

Responding to a reporter’s questioning about his tax returns, Romney called the “fascination” with his taxes “small-minded compared to the broad issues that we face.” But, he added, he did go back through his taxes for the past 10 years, and he’s never paid less than 13 percent.

His remarks, per the press pool (via BuzzFeed):

“I just have to say, given the challenges that America faces – 23 million people out of work, Iran about to become nuclear, one out of six Americans in poverty – the fascination with taxes I’ve paid I find to be very small-minded compared to the broad issues that we face. But I did go back and look at my taxes and over the past 10 years I never paid less than 13 percent. I think the most recent year is 13.6 or something like that. So I paid taxes every single year. Harry Reid’s charge is totally false. I’m sure waiting for Harry to put up who it was that told him what he says they told him. I don’t believe it for a minute, by the way. But every year I’ve paid at least 13 percent and if you add in addition the amount that goes to charity, why the number gets well above 20 percent.”

Though of course giving money to charity and paying taxes are quite different things.

“I don’t have a reaction. My statement to that would be that this president believes the tradition for presidential candidates putting forward multiple years of tax returns is a useful and valuable one. It’s not always a comfortable one but it’s one he abided by and one the American people believe is right and expect their candidates to abide by.”

Take a look at Romney’s remarks below: