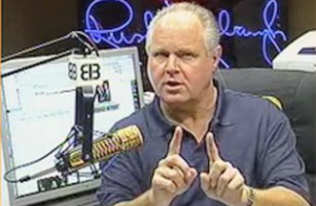 On his syndicated radio program Thursday afternoon, Rush Limbaugh continued his attacks on Mitt Romney spokeswoman Andrea Saul for her perceived gaffe in telling Fox News that the dead woman subject of the Priorities USA ad would still alive if she had lived under Romney’s Massachusetts health-insurance mandate system.

Limbaugh explained that President Barack Obama and his supporters “circle the wagon” and double down whenever one of their own commits a gaffe, whereas conservatives and Republicans are willing to criticize one of their own. Thus, he said, his willingness to “go ballistic” on Saul, especially given what “they’re up against.”

The conservative firebrand then went on to compare the Priorities USA ad to Lyndon B. Johnson‘s infamous 1964 “Daisy” ad that suggested a Barry Goldwater presidency would result in nuclear war, saying that the current pro-Obama super PAC’s ad is “disgusting.”

“I guarantee you we’re going to get an ad: ‘Where was Mitt Romney on 9/11?’ You think that’s outrageous? How could anything be more disgusting than this one?”

“What’s to stop them?” he continued. “If they’re going to run an ad saying Romney killed some guy’s wife, why wouldn’t Ann Romney run out and kill her horses that lose races? That’s all they’ve got, folks…. They don’t have a candidate that they can say ‘four more years’ about…. They’ve got a disaster that they’ve got to get re-elected.”

“It’s only a matter of time before the Obama campaign tries to tie Romney to 9/11 somehow,” he said. “After all, the attack was in… the financial district of New York City. Bain Capital is located in Boston. All of Bain’s competitors are in New York. And we all know Romney was calling all the shots in 2001.”

Listen to the clip below, via Rush Limbaugh: