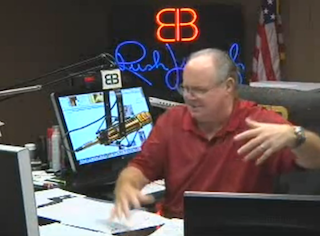 “What is it about politicians” that makes them cheat? That’s the question Rush Limbaugh sought to answer on today’s show. “Did you ever think,” he wondered, “that it’s because of who they were raised by, who they were hanging out with?” That’s right, everyone. Rep. Anthony Weiner can leave rehab now. Rush Limbaugh has figured out why he sent those dirty messages to women, including some allegedly underaged ones. It’s all because liberal women are so bossy and ugly. Duh!

“Why can’t we blame liberal women for what these politicians are doing? They have feminized politics to such a degree that men can’t be men anymore. They’ve all got to be out there and prove that they’re Alan Alda or whoever is the definition of a real man. Michael Kinsley? I don’t know. But look at what we’re told. We’re told that Weiner is the man of the hour. What he is is a genuine pencil-necked geek.”

Limbaugh then continued by reiterating his distrust of “sexting” and comparing Weiner cheating to President Obama seeking hamburgers to get away from the First Lady’s stifling dietary restrictions.

Wait a second? Doesn’t it sound like Limbaugh is defending Weiner here. Well, it seems he had a huge problem with the ABC News segment where women like Claire Shipman pointed out how few female politicians cheat. Apparently, as much as Limbaugh hates Democratic politicians, he hates uppity ladies more.

Of course, Limbaugh made it clear that he wasn’t making excuses for Weiner’s behavior. He was merely trying to explain it. After all, he asked listeners, “When was the last time you heard about a racecar driver or an auto mechanic getting caught in a sex scandal?”

Of course! That makes so much sense! It’s all because their women still wear skirts and know how to cook. It’s not at all because there’s no such thing as an auto mechanic gossip magazine! Way to go, keeping your women in line, Gus from Pep Boys!

So yeah, Limbaugh’s just pointing out the truth. There’s nothing at all offensive in this 11 and a half minute rant so you gals out there better not start whining (we know how you like to whine, especially the liberal ones!). After all, you have it so easy. I mean, Katie Couric only has a job at ABC because she’s a woman.

Yeah, that’s another thing Limbaugh pointed out. Again, just a fact. Not at all offensive. Don’t get your panties in a bunch or I’m gonna have to go cheat on my girlfriend.