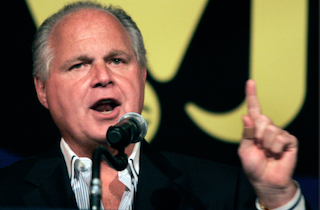 A little over a year ago, Rush Limbaugh triggered national controversy when he deemed Georgetown student Sandra Fluke a “slut,” in response to her advocating insurance coverage of contraception. Evidently, Cumulus Media is still blaming Limbaugh for ad losses — an accusation Limbaugh isn’t taking lightly. According to reports, Limbaugh is considering parting ways with Cumulus.

Limbaugh’s potential departure, according to POLITICO, is due to Cumulus CEO Lew Dickey blaming the company’s advertising losses on the fallout from Limbaugh’s remarks about Fluke. If he leaves, 40 stations owned by the company would lose rights to Limbaugh’s shows, which is the country’s most popular talk radio program.

The New York Daily News also reported the story, noting, “In New York, that would very likely take him to WOR, which would create the biggest shakeup in city talk radio since WOR scooped up Bob Grant after WABC fired him in 1995.”

“It’s a very serious discussion, because Dickey keeps blaming Rush for his own revenue problems,” the source close to the show told POLITICO. “Dickey’s talk stations underperform talk stations owned by other operators in generating revenue by a substantial margin. It’s not a single show issue… it’s a failure of the entire station. And trying to blame Rush for that is not much of a business partnership.”

POLITICO added that the full extent of Cumulus’ issues with advertisers isn’t known, but that, “in an August 2012 earnings call, Dickey said Cumulus’s top three stations had lost $5.5 million, in part because of the boycott.” Earlier this year, Dickey said the Fluke ordeal was “still causing problems.” He asserted that “the talk side has been challenged” — and “there has been residual hangover on the talk side in terms of advertisers sitting out and not placing there.”

Cumulus has a contract with Limbaugh through 2013 and a spokesman told POLITICO they don’t “comment on negotiations with talent under contract.”