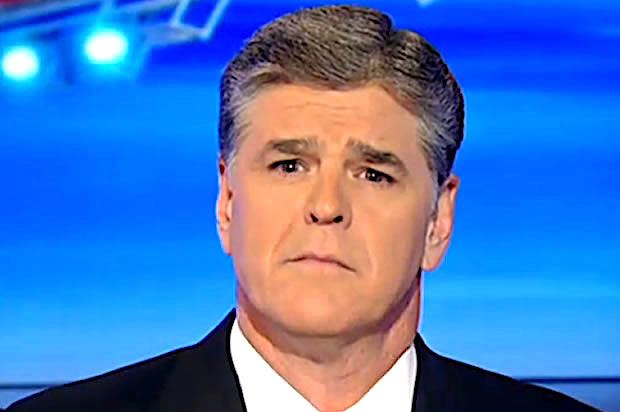 Over the weekend, Fox News host Sean Hannity got into a Twitter fight with LGBT advocate and actor Chaz Bono over the WikiLeaks CIA release and Hannity’s comments following the document dump. While Hannity eventually wrapped up his battled with Bono, he decided to end the weekend with a flourish by lashing out at the media in general.

Around midnight last night, the conservative firebrand and fervent Donald Trump defender unleashed a series of tweets (complete with random capitalization) in which he railed against both “alt left” media and “never Trump idiots,” taking specific issue with National Review.

They bitch and Whine that everyone sees them as Lazy, lying, overpaid, Ideological “Fake News”. Russia/Trump story is Fake News. Read….

Many at NRO did all they could to defeat @realDonaldTrump they failed. If they were successful @HillaryClinton would have chosen for SCOTUS

Regarding the National Review, which famously released an anti-Trump manifesto in January 2016, it appears an article written by Kevin Williamson criticizing Hannity’s recent use of the term ‘Deep State’ is what set him off, as Hannity tweeted out a link to it.

Obama holdovers. So sad NRO is so ignorant & has sunk this low. Conservative review! NRO IS now totally irrelevant https://t.co/0Tt2ftvjoc

This morning, Hannity continued the his Twitter assault, once again using the term ‘Fake News’ while claiming the media colluded with Hillary Clinton.

Alt left Propaganda destroy @realDonaldTrump media is CLUELESS about how @POTUS operates. He is his own man, & he makes his own decisions!!!

ANY suggestion to the contrary is just more “Fake News”. Media lied about Obama, they colluded with HC, and now are out to destroy @POTUS https://t.co/BiP4C9GmT0

It should also be noted that CNN’s Brian Stelter devoted a segment on his media criticism show Reliable Sources to Hannity, stating that the Fox host’s disdain for journalism “hurts his viewers.”