Salon Should Give Up on Politics and Just Write About Sex

Salon Should Give Up on Politics and Just Write About Sex

If anyone needs any further proof that liberal online magazine Salon is a joke (and you really shouldn’t), take a look at the most recent spat between them and Bill O’Reilly. The Fox host lashed out at Salon for alleged inaccuracies, calling them “rank propaganda” just as bad as white supremacist website Stormfront. In return, Salon angrily hit back at O’Reilly, calling him a “self-important palaverist.”

On the topic in question, O’Reilly was unquestionably right. Salon ran a headline saying that he said that the murder of a San Francisco woman by an illegal immigrant “proves Donald Trump is right about Mexicans.” O’Reilly never said that. In Salon’s “rebuttal” the author of the original story’s somewhat lame excuse is that “he didn’t have to.”

Apparently, the journalists over at Salon are now in the business of inferring what someone really meant, and reporting it as if it were fact. This is what others in the journalism industry typically refer to as “making sh*t up.”

It’s not exactly a secret that Salon’s political coverage is highly partisan and, to put it politely, idiotic. Among the more recent volcano-hot takes: Ted Cruz must be lying about bulk sales of his book because he’s a conservative, flying the Confederate flag should be criminalized, and literally every white person is racist. One more famous instance of Salon hackery will always be my favorite, because it was highlighted by yours truly:

But what O’Reilly and other detractors miss is that for all the poorly-argued political clickbait Salon writes, it churns out an equally impressive amount of bizarre, sex-obsessed clickbait.

Most, like “How I joined the Mile High Club: Naked, weightless, giggling uncontrollably,” feature Penthouse-esque sexual antics, framed in such beautifully-written prose such as “The Cessna thrashed down the runway, engines growling, vibrations tickling my bum through the seat until the plane leaped into the clear Florida sky like a giant tin locust.” 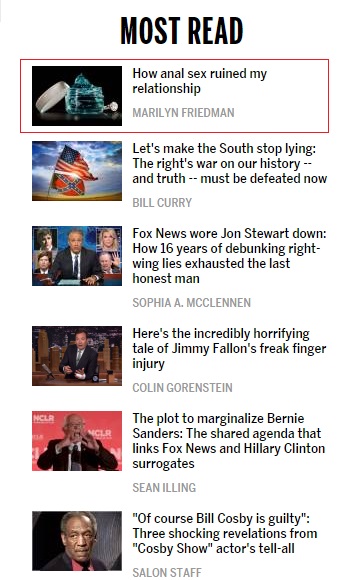 Salon isn’t just dealing in smutty masturbatory aids. Oh no, many of their pieces contain helpful information for the average person’s sex life. In just an hour of browsing, I learned loads!