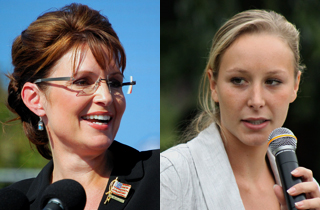 Palin wrote that she admires France’s new “It Girl” who “is a devout Catholic and unapologetically pro-life,” and praised the young party leader for her embrace of France’s “Judeo-Christian identity.” Palin also commended Le Pen’s willingness to stand up against the influx of Syrian migrants in western Europe.

“The migrant crisis has made a mockery of any idea of national sovereignty,” Palin opined, noting Germany’s “insane decision” to accept one million refugees in 2015. Launching into a critique on liberalism’s “self-destructive hatred” for Judeo-Christian values, Palin wrote:

The Left wraps itself in political correctness and multiculturalism like a suicide vest. They’d rather blow up the whole country than admit the stupidity of thinking a nation can remain the same after inviting in millions of people who despise its values.

Le Pen, who became France’s youngest elected lawmaker in 2012, called for an “immediate halt” on migration following the deadly terror attacks in Paris on Nov. 13. Despite an increase in support after the attacks, Le Pen lost regional run-off elections last week in a huge upset for France’s National Party. Despite this, Palin wrote, westerners are “waking up” to “this Great War” against ISIS.

Comparing the French leader to Republican frontrunners Donald Trump and Ted Cruz–who have been accused of fear-mongering and bigotry over their calls to stymie the flow of Syrian refugees–Palin argued that Le Pen’s “rhetoric isn’t about “hate or xenophobia.”

“It’s about love – that deep love of country we call patriotism,” she wrote.