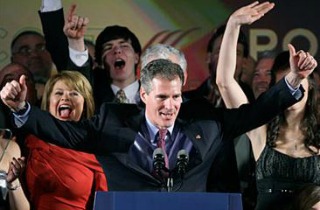 Following months of speculation, former Republican Massachusetts Sen. Scott Brown has launched an exploratory committee to investigate whether he should mount a campaign against Sen. Jeanne Shaheen (D-NH) in the Granite State.

Brown sold his Massachusetts home several weeks ago and changed his permanent residency to his New Hampshire vacation home in what many speculated would be preparation for a Senate campaign. CBS News reporter Nancy Cordes learned that Brown informed his former Senate colleagues that he will announce an exploration into his Senate prospects on Friday afternoon at an event in New Hampshire.

“He has signaled that he wants to go on a listening tour of sorts in New Hampshire, the way Hillary Clinton did when she ran for Senate in New York in 2000 to try to shed the carpetbagger label,” CBS reported.

Some political observers believe that this latest move is merely prelude to an official run. The Washington Post’s Aaron Blake opined on Thursday afternoon that there is “no legal difference” between a committee and an official campaign.

Opening an exploratory committee after a year of considering it means you're in. And there's no legal difference. #NHSEN

The latest polls of a hypothetical race between Brown and Shaheen show the incumbent Democrat running well ahead of her prospective Republican opponent. The latest survey, taken between February 27 and March 5 showed Shaheen leading Brown with 52 percent to 39 percent among likely New Hampshire voters.

Brown is still a Fox News Channel contributor and will have to end his contract with the network if he launches a Senate bid.