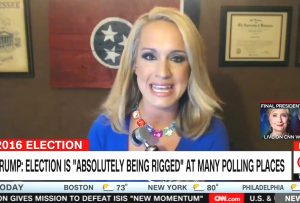 Trump supporter and paid CNN commentator Scottie Nell Hughes said Monday morning that it was perfectly acceptable to push the “rigged election” narrative in order to turn out voters.

Speaking to CNN’s Chris Cuomo, Hughes defended Trump’s tack of alleging that the election was being stolen from him, saying the effort to undermine confidence in the democratic system bothered her “not at all.”

“Right now, it’s all about who’s going to turn their people out to the polls. The Clinton campaign has one way of doing it, one strategy. The Trump campaign is saying, ‘You have to turn out. There’s no way you can just stay home this year.'” She did not clarify how the Clinton campaign’s mobilization strategy was different.

Hughes was adamant that voter fraud was a real and significant threat to election integrity. “There are some irregularities — there are some issues that need to be addressed,” she said.

Hughes cited a Pew report from Feb. 2012 which found that over 1.8 million deceased individuals were listed as active voters. She said 2.95 million were registered to vote in more than one state (the four-and-a-half-year-old study she was apparently citing said 2.75 million, for what it’s worth).