Sad! What Happened to Trump’s Brain? 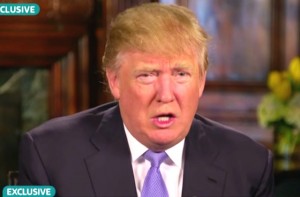 Donald Trump doesn’t need help from the media to lose this election. He’s doing a great job on his own by being a blowhard with a freewheeling, loose mouth. Instead of assailing Hillary Clinton’s many (many) leadership flaws, Trump is devolving into a laugh track of outlandish claims.

In the past week, Trump blamed the media along with a global conspiracy for his tattered campaign. Who’s Trump gonna blame next, God Almighty?

“The election is absolutely being rigged by the dishonest and distorted media pushing Crooked Hillary – but also at many polling places – SAD,” Trump tweeted.

We all know the liberal mainstream media has been in the tank for Hillary since last year. But it probably wasn’t helpful that a barrage of sexual harassment allegations against Trump exploded like a sh*#storm; and that subsequently, the GOP presidential nominee did a sh*##y job denying them. (Note to Trump: you probably want to dial back your Bill Clinton attacks, and not have a parade of Bill’s mistresses around like groupies when you live in a bigger, more breakable glass house than he does.)

Even former Speaker of the House Newt Gingrich, a Trump supporter, got in on this outlandish rigged-election claim.

“This is not only about beating Hillary Clinton. It’s about breaking the elite media, which has become the phalanx of the establishment,” Gingrich cried.

Yes, all news outlets have bias but this isn’t why Trump’s poll numbers are down. Remember the media’s non-stop coverage of him throughout most of the year helped him win the GOP nomination.

Over and over again, whether in debates with Hillary or debates with the media, Trump takes the bait, hook line and sinker. He descends lower and lower into the mud. This is why he’s losing traction. Attacking his sexual harassment accusers — rather than assailing Hillary as unfit for office was also less than helpful.

Trump should be talking about the WikiLeaks hacked emails from Hillary’s campaign manager John Podesta — prima facie evidence that demonstrates how corrupt she is.

In one email, her staff joked about how sad it was that the San Bernardino terrorist was Muslim male instead of a white one. No, rather than talk about the real issues in this campaign, Trump is tweeting about how Saturday Night Live is also a co-conspirator in the media’s war against him.

Perhaps in his delusional state, Trump forgot that SNL is a satirical comedy show, and that the show mocks everyone, including Hillary. Again, Trump would rather tweet about an SNL episode, as opposed to serious issues related to winning this election: Hillary’s untrustworthiness and her corrupt behavior, the unAffordable Care Act, lack of jobs, a fragile economy and an impending recession.

One cannot win a presidential election by firing off a non-stop arsenal of tweets, antics and insults (e.g. accusing your opponent of being on drugs). This past weekend at a packed rally of his Amen Corner supporters, Trump joked:

“We should take a drug test prior [to the next debate], because I don’t know what’s goin on with her. At the beginning of her last debate she was all pumped up at the beginning, and at the end it was like, ‘Oh, take me down.’ ”

Was this a knee-jerk reaction to specious allegations that he was on cocaine during the two debates? What was Trump thinking? Or maybe that’s the problem — he’s not thinking…like a winner anyway. This late in the game, the only person rigging the 2016 election is Trump — with his deliberate missteps, one after another. Trump is becoming his own Saturday Night Live routine, and that’s not good when you’re running for President of the United States of America.