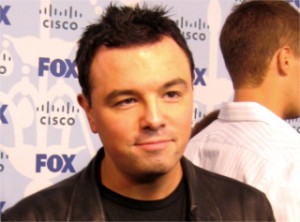 Seth McFarlane, creator of the irreverent animated sitcom Family Guy, thinks that progressives have been doing injury to their cause by failing to choose their battles.

In an interview on the Jason Rantz Show, McFarlane, who supports Bernie Sanders, thinks that Hillary Clinton has “been treated a little harshly by the left.” Donald Trump represented some of the worst of the right — “bigotry gone wild,” he called it — but hastened to add that the situation on the other side of the aisle was also getting out of control. “My side, the left, has gotten a little unreasonable when it comes to separating the trivial from the profound,” he said.

McFarlane pointed to certain injustices that deserved outrage, like the intransigence of Kentucky clerk Kim Davis, who made national news when she refused to issue marriage licenses to same-sex couples, or the “religious liberty” laws recently signed into law in North Carolina and Mississippi.

But he noted that the culture of outrage and obsession with political correctness was causing the left to lose sight of what mattered.