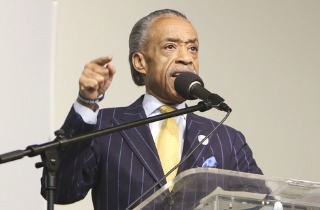 Needless to say, the racial insensitivity of these remarks is bothering a lot of people today. Both Pascal and Rudin apologized today, but it didn’t take long for Al Sharpton to jump into the fray today.

In a statement release through national Action Network, Sharpton condemned the “offensive” emails and said they help to illustrate a serious diversity problem in Hollywood and how “comfortable” studio executives are with using this kind of language.

And worst of all, Sharpton says, Pascal’s behavior is very reminiscent of Donald Sterling.

Here’s the full statement from Sharpton:

The statements in the leaked emails by Sony Pictures Co-Chairman Amy Pascal to producer Scott Rudin are offensive, insulting and should be denounced in the harshest terms.

What is most troubling about these statements is that they reflect a continued lack of diversity in positions of power in major Hollywood studios. The statements clearly show how comfortable major studio powers are with racial language and marginalization. Her apology is not enough there must be moves by her studio and others to respect the African American community and reflect that respect in their hiring and business practices.

She should meet with Black leaders immediately to deal with the gravity of her statements as well as the inequality of how they do business. I have asked Rev. KW Tulloss of National Action Network’s Los Angeles Chapter to convene an emergency meeting to weigh further actions in this area.

These emails nominate Amy Pascal to be considered by some of us in the same light that we concluded and moved on the ownership of Donald Sterling of the L.A. Clippers.