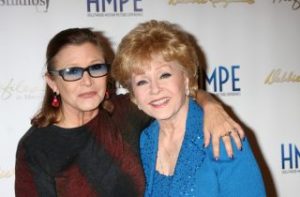 Beloved actress Debbie Reynolds passed away today at the age of 84, just one day after the death of her daughter Carrie Fisher. Earlier today, Reynolds was rushed to the hospital, reportedly with a stroke. She had been at her son Todd Fisher’s home in Beverly Hills when it happened.

Debbie Reynolds was one of the last of Hollywood Royalty. It breaks my heart that she is gone. I’d hoped that my grieving was done for 2016.

Today is officially a sad day. As a mother my heart goes out to Debbie Reynolds and her daughter Carrie Fisher. RIP DB and CF

Debbie Reynolds, a legend and my movie mom. I can’t believe this happened one day after Carrie. My heart goes out to Billie.

I can’t imagine what Carrie Fisher and Debbie Reynolds’ family are going through this week. I send all of my love.

I can’t imagine what kind of pain the family of Carrie Fisher and Debbie Reynolds are feeling right now. My prayers are with them.

There is nothing harder than having to bury a child. Debbie died of a broken heart, but she’s with her daughter now. https://t.co/G3pcQCoViK

Debbie Reynolds was pure class. She was loving, talented, beautiful, unsinkable. I feel sorry for anyone who never got a chance to meet her. pic.twitter.com/XrIDFuLfYU

#DebbieReynolds has just died. This is too hard to comprehend. Beautiful, talented, devoted to her craft, she follows Carrie, dead days ago.