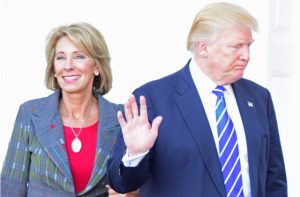 Trump supporters and sympathizers have a go-to response when the president is (rightfully) identified as a sexist. “But what about Kellyanne Conway? Sarah Huckabee Sanders?” He’s hired so many women, clearly he respects them.

Of course, there’s plenty of evidence that as an employer, Donald Trump sexually harassed and told women who breastfed they were disgusting, and as of Monday, a new, damning report that the White House gender wage gap has tripled under the Trump administration has surfaced. I can’t wait to hear how Trump’s supporters defend him from accusations of sexism, now.

The think tank behind this new report is actually the conservative American Enterprise Institute (AEI), which found that since Trump took office, female staffers are making a median of $72,650 while male staffers earn a median of $115,000.

“The typical female staffer in Trump’s White House earns 63.2 cents per $1 earned by a typical male staffer,” AEI scholar Mark Perry wrote. This is a gap of nearly 37 percent.

The gender pay gap stood at about 11 percent during President Obama’s last year in office, while the national pay gap is roughly 17 percent, the report states. Nearly 74 percent of the top 23 Trump staffers are male, compared to 52 percent under Obama, the report found.

For his own part, President Obama’s administration led numerous efforts to fight the pay gap on a national level, and offer female employees more resources and protections. The root of the problem has arguably always been gendered perceptions of who is more qualified, authoritative, and deserving of raises and promotions, of the quiet establishment of “men’s clubs” in company leadership.

And, of course, there’s the sexist idea that women will all go on to have children and assume the role of sole caretaker while male employees who go on to become fathers will be entirely unaffected by becoming parents. Legislation guaranteeing female employees the right to paid maternity leave resulted in them being 8 percent less likely to be promoted. Forty-two percent of women are now the sole or primary breadwinners of their families, but they continue to shoulder disappointing and discouraging discrimination, despite negotiating for higher pay at equal rates with men.

It appears that not only is President Trump doing virtually nothing in terms of legislation to protect women in the workplace from wage inequality, but he’s also perpetuating wage inequality, himself.

Of course, what else could we expect from a man who ran for president promising to “Make America Great Again”? Historically, women have always faced immense challenges to access education and enter term work force, and there has never, ever been a point in our nation’s history where they earned an equal wage with men. Trump promised to take us back in time in our nation’s history, and it looks like that’s one promise he’s actually managed to deliver on.