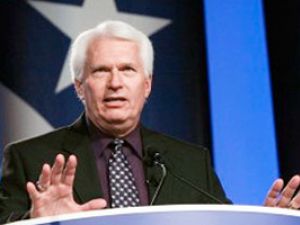 Richard Grenell, Mitt Romney‘s new foreign policy and national security spokesman, happens to be openly gay — and Bryan Fischer of the American Family Association has been attacked him rather bluntly for it on Twitter. Romney hiring a gay spokesperson, he said, is like telling the “pro-family community” to “drop dead.”

Fischer is the director of issue analysis for the AFA. Here are some of his tweets:

I’m not a homophobe; I’m a homo-philiac, meaning I love them enough to tell them the truth and hope they leave the lifestyle.

Romney picks out & loud gay as a spokesman. If personnel is policy, his message to the pro-family community: drop dead.

@BuzzFeedBen @amaeryllis @RichardGrenell Attack on me at VVS was his first shout-out to gay lobby: I’m with you, not with them.

If Romney appointing gay as spokesman is not about homosexuality, why are gay groups celebrating? Hmmm? ow.ly/arlyZ

On Monday, Fischer added to his original criticism — linking Romney’s hire to the Secret Service scandal and national security:

I’m guessing Romney won’t respond to my criticism. Would have to defend hire, go deeper in the tank for pro-gay agenda.

Romney’s gay hire would serve in his admin in natl security. You want to tell me there’s no Secret Service-type risk here?

Grenell, himself, hasn’t been immune to scandal. Over the weekend, his Twitter account was cleaned up, scrubbing almost 1,000 of his controversial tweets that criticized a range of people, including Newt and Callista Gingrich, Michelle Obama, Hillary Clinton and Rachel Maddow. Deleted remarks include, “rachel maddow needs to take a breath and put on a necklace” and “Callista stands there like she is wife No. 1.”

About the First Lady, he wrote, “did you notice that while Michelle Obama is working out on the BiggestLoser she is sweating on the East Room’s carpet? just saying…”

Grenell apologized, saying, “my tweets were written to be tongue-in-cheek and humorous but I can now see how they can also be hurtful. I didn’t mean them that way and will remove them from twitter. I apologize for any hurt they caused.”