Tell us how you really feel, George!

In one of the funnier online bloopers in awhile, George Stephanopoulos, host of ABC News’ This Week with George Stephanopoulos, made some significant changes to panelist and Wall Street Journal columnist Peggy Noonan‘s résumé in a blog recap of the show. Toward the end of an article recapping a discussion of presumptive Republican nominee Mitt Romney’s vice presidential hunt, Stephanopoulos says “But for Wall Street Journal communist Patty Noonan, the No. 1 goal for Romney should be avoiding the fiasco that ensued for the last GOP nominee, John McCain, after he chose Sarah Palin in 2008.” 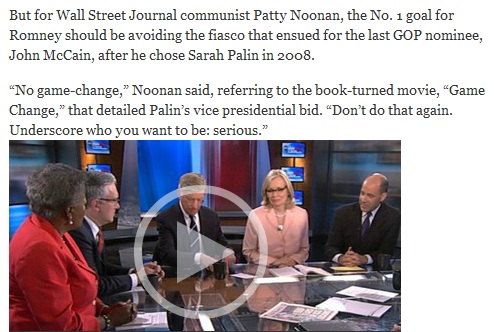 The blog was later corrected to reflect Noonan’s actual bona fides. I’m not sure if Stephanopoulos has had the chance to explain it to Noonan, but I suggest he blame it on Auto Correct.

As far as her advice on a VP pick for Romney goes, I think she and the rest of the panel are relying on badly outdated historical perspectives. George Will cited the fact that “in 10 of the 16 presidential elections since World War II, the vice presidential running mate has failed to carry his or her state,” and ABC News political analyst Matthew Dowd “said the idea that a running mate will help a candidate pick up a certain demographic or region of the country is ‘folly.'”

But these factors, and even Noonan’s advice to avoid a “Game Change,” ignore the fact that, with the exception of Sarah Palin and Geraldine Ferraro, the VP slot has never been held by a “game changer.” Although Palin ended up being a net negative, a different bold pick could net Romney benefits that the bottom of the ticket doesn’t ordinarily deliver.

Former Secretary of State Condoleezza Rice has been pooh-poohed as a pick (despite polling that shows support for the idea) because of some moderate positions she holds, particularly on abortion rights. Those might make her less-than-palatable for the conservative base, but those people hate President Obama so much, they’d turn out for George Soros if you put an “R” after his name. Sec. Rice would, however, appeal broadly to independents, and maybe even some Democrats, in a way that your average white male VP pick never has.

To say that the VP slot never delivers a state or a demographic, when you’ve only ever had one kind of VP nominee, is foolish. If the race is still knotted up like it is now come August, Romney can afford to play it safe with a Rob Portman. If he’s trailing significantly, though, he shouldn’t let Sarah Palin scare him back into that white male box.

Here’s the clip, from This Week: