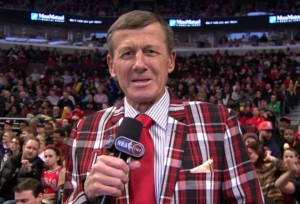 The sports world is rallying around beloved TNT reporter Craig Sager, as he continues his battle with leukemia.

The broadcaster underwent his third bone marrow transplant yesterday at a hospital in Houston. Photos shared Wednesday on Twitter by his son, Craig Sager Jr., appeared to show Sager in good spirits.

Everlasting thrill as he receives the donation through his chest!! What a proud moment!!! ?#Incredible #SagerStrong pic.twitter.com/PuBdsxp3qA

Meanwhile, support poured in from various teams, athletes, and broadcasters.

Everyone say a prayer for Craig Sager tonight… https://t.co/so8HwW4S4p

Everyone say a prayer for Craig Sager tonight… https://t.co/so8HwW4S4p

Our thoughts are with Craig Sager as he continues his battle with leukemia. #SagerStrong pic.twitter.com/riQQyotTjh

One of the toughest guys around. Keep going @CraigSagerJr https://t.co/cHPzZrSCBY

So dazzled by Craig Sager as he gets his 3rd bone marrow transplant. And so grateful to the young man who donated. https://t.co/kBncWczYah

And the Associated Press reported that Sager’s TNT colleague, NBA legend Charles Barkley flew to Houston to be by Sager’s side, defying medical orders that he not travel following hip replacement surgery.

“Craig Sager is one of the most interesting people I’ve ever met,” Barkley said. “We go to see Sager to cheer him up and by the time you leave you’re like, ‘Is anything wrong with him?’ He has the most positive attitude.”

This was the most recent update on the procedure from Sager Jr., posted to Twitter 18 hours ago.