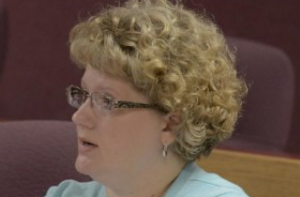 The latest move from anti-abortion lawmakers involves advocating for the so-called “personhood” of fetuses. Personhood measures have appeared on a handful of state ballots across the country over the past few years and have been resoundingly defeated for the most part, due in part to the lack of exceptions personhood measures provide for victims of incest or rape to seek terminations of any resulting pregnancy.

To anyone worried about that, one representative in Missouri says this:

It is not up to us to say ‘no, just because there was a rape, they cannot exist. Sometimes bad things happen — horrible things — but sometimes God can give us a silver lining through the birth of a child.

That quote came from Tila Hubrecht at a debate about the proposed ballot measure, which would see voters deciding if they should “protect pregnant women and unborn children by recognizing that an unborn child is a person with a right to life which cannot be deprived by state or private action without due process and equal protection of law.”

Listen above to her comments, via Progress Missouri.

Beyond advocating for rape victims to carry the pregnancy resulting from their attack to term, the representative also doesn’t believe in abortions to save the life of a mother. Hubrecht, as pointed out by Raw Story, had a complicated delivery with one of her children but asked the doctor to let her die if necessary. If the measure makes it to the ballot and passes with voters, the choice Hubrecht made with her doctor could become a mandate for women in the state.