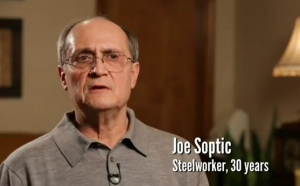 An ad released yesterday by Priorities USA, the pro-Obama Super PAC, featured a steelworker named Joe Soptic who connected Mitt Romney‘s business dealings at Bain Capital involving GST Steel to his wife’s death. The Obama campaign has not condemned the ad, and staffers Robert Gibbs and Stephanie Cutter denied knowing the specifics of Soptic’s story. However, according to POLITICO, Soptic was featured in an Obama campaign ad back in May and in a campaign conference call.

The Obama campaign ad Soptic appeared in back in May was called “Steel,” focusing on the role of Bain Capital in the closure of GST Steel in Kansas City. Soptic was featured on an Obama campaign conference call led by Cutter when the ad was announced to reporters.

In the campaign’s ad, Soptic speaks only about the plant. In the Priorities spot, he tells the personal story he relayed during the Obama campaign conference call.

“We have no idea when Priorities shot their spot,” an Obama campaign official said. “We’re not allowed to coordinate with them – but we can tell you it wasn’t when we shot ours.”

The aide didn’t answer questions about when the Obama campaign shot its Soptic footage or explain Cutter’s televised statement.

POLITICO notes that Soptic shared the story about his wife’s death during the Obama campaign conference call with Cutter, despite Cutter’s claim this morning that she was unaware of Soptic’s story.