Steve Inskeep: Most NPR Listeners Identify As ‘Middle Of The Road’ Or ‘Conservative’ 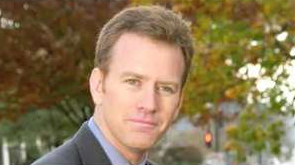 Steve Inskeep, host of NPR’s Morning Edition, took to the Wall Street Journal in an attempt to clear up a common misconception about NPR: That most of its audience leans to the left. In fact, Inskeep says, most of the media platform’s radio listeners identify as “middle of the road” or “conservative.”

Inskeep’s article comes at the tail end of a veritable whirlwind surrounding an undercover video by conservative filmmaker and activist James O’Keefe. The footage, later revealed to be edited, showed former NPR executive Ron Schiller making disparaging remarks about Tea Party members and other conservatives, as well as touting liberals as being “more educated” than their right-leaning peers.

Inskeep, who calls Schiller’s comments “boneheaded” even in light of O’Keefe’s selective editing, tackles the notion that NPR’s listeners overwhelmingly identity as liberal by citing surveys addressing the issue:

The facts show that NPR attracts a politically diverse audience of 33.7 million weekly listeners to its member stations on-air. In surveys by GfK MRI, most listeners consistently identify themselves as “middle of the road” or “conservative.” Millions of conservatives choose NPR, even with powerful conservative alternatives on the radio.

Inskeep notes the NPR has listeners within the military as well and also counts various Republican lawmakers among its fans. He also boasts that while “not much of the media” pays particular attention to the middle of the U.S., NPR and its various local stations do.

Finally, Inskeep notes that the coverage NPR is able to provide on breaking and building stories from around the world has no political slant – it only seeks to provide facts and details as they unfold:

NPR’s audience keeps expanding because Americans want more than toxic political attacks. They want news. Think again of my colleagues in Libya, going forward to bear witness amid exploding shells. Is that liberal or conservative? Maybe it’s neither. It’s an honest and honorable effort to keep Americans informed.

Then again, if NPR is indeed a media network with a political bias, despite its diverse listener and readership, what would an alternative, conservative network (rather than individual programming) with a presence on the web and radio be?