Tapper Confronts Trump Spox: Will He Ever Stop Criticizing Journalists For Doing Their Job?
video

Tapper Confronts Trump Spox: Will He Ever Stop Criticizing Journalists For Doing Their Job? 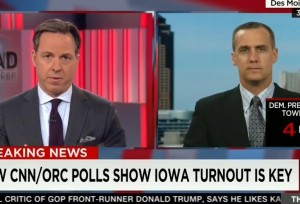 Almost every time a member of the press subjects Trump to a shred of scrutiny, The Donald’s wont is to bawl a bit on Twitter about his unfair treatment, impugn the journalist’s skill, take his toys out of the sandbox, and storm off home.

So it was Thursday when the GOP frontrunner lobbed a social media spitball at CNN’s Alisyn Camerota:

New Day on CNN treats me very badly. @AlisynCamerota is a disaster. Not going to watch anymore.

Jake Tapper defended his colleague as an “excellent journalist and lovely person,” and asked Trump campaign manager Corey Lewandowski: “I wonder, you know, it’s not going to get any easier if he actually becomes the nominee and becomes the president. At some point, is he going to stop tweeting especially criticisms at journalists?”

Lewandowski parried by finding the mainstream media guilty of bias, citing what he described as the networks’ unwillingness to show the crowds at Trump rallies, only covering them if there’s a protest.

Trump’s tweet is likely a reference to a segment from Thursday morning’s New Day, in which Camerota had the temerity to ask questions about Trump’s about-face with Ted Cruz and his apparent lack of familiarity with his “favorite book,” the Bible.

It’s unclear on which point Camerota offended Trump in the course of doing her job.

Camerota began an interview with Trump campaign co-chairman Sam Clovis by stating that “at the moment, Ted Cruz is beating Donald Trump in Iowa” (which he is, according to some polls, anyway). “In the past few days, he’s begun calling Ted Cruz a nasty guy. Which one is it? Does he think that Ted Cruz is respectable or nasty?”

As to the Bible mistake, Camerota noted that Trump blamed a recent flub (referring to Second Corinthians as “Two Corinthians”) on Family Research Council president Tony Perkins, saying that Perkins wrote out the name of the book for him, using the numeral “2” — hence the mistake.

“Basically, Sam, he’s admitting that he had a cheat sheet,” Camerota said. “Does that show that Donald Trump is not familiar with the Bible, and he can’t quote passages from the Bible, and he was pandering there?”

Clovis assured her that Trump is “a person of deep faith. He’s just not a person that puts it on his sleeve and enunciates that.”

To the extent that Trump is a spiritual man, he emphatically has enunciated it at every opportunity. Especially in the run-up to the Feb. 1 Iowa caucuses, he has assiduously made his Christian faith a cornerstone of his campaign. Trump’s “great relationship with God” may as well be written on his sleeve in the same two-story-tall brass-plated letters with which he modestly emblazons his name. One would think that a reporter has every right to challenge his sincerity on that front, as Camerota did.

In any case, a nasty tweet aimed at Tapper can’t be far away.