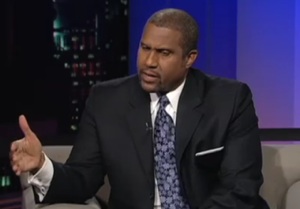 Earlier this week Ayaan Hirsi Ali was on Tavis Smiley‘s PBS show to discuss her new book, Nomad: From Islam To America, A Personal Journey Through The Clash Of Civilizations. In a back and forth about Islamic extremists, Hirsi Ali mentioned how some Muslims believe that “killing other people is a great thing to do,” to which Smiley shot back that Christians are more violent, saying “Oh, Christians, every day, people walk into post offices, they walk into schools, that’s what Columbine is.”

The full quote from Smiley (transcript from Breitbart.tv):

“Oh, Christians, every day, people walk into post offices, they walk into schools, that’s what Columbine is – I could do this all day long. There are so many more examples of Christians – and I happen to be a Christian. That’s back to this notion of your idealizing Christianity in my mind, to my read. There are so many more examples, Ayaan, of Christians who do that than you could ever give me examples of Muslims who have done that inside this country, where you live and work.”

For some context and background on Smiley’s guest, Ayaan Hirsi Ali is a Somalia-born writer and filmmaker who was raised a strict Muslim. After surviving civil war, she earned a political science degree and became an outspoken critic of Islamist oppression. Hirsi Ali is now a resident fellow at the American Enterprise Institute and has written several books, including The Caged Virgin, Infidel and Nomad.

Certainly there has been more violence by Christians in the United States because it is largely a Christian nation. But Smiley appears to be comparing apples to oranges. The fundamental jihad that’s lead to the recent car bomb attempt in Times Square appears to have been inspired by drone attacks in Pakistan. Post Office shootings are a tragedy of another color entirely.

To be fair, the conversation was very interesting, and went far deeper than the section excerpted below (the full segment can be viewed on the Tavis Smiley website.)