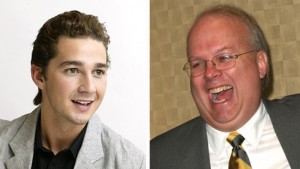 I used to think that Shia LaBeouf was making all of his career decisions on the dreams and fantasies I had circa fifth grade. I mean, the guy got to be in two Transformers movies and play Indiana Jones’ son! Thanks to this Los Angeles Times article, I now think he’s actually basing his role choices on the fever dreams I had back when I was horribly sick and ate pizza right before bed. That’s because, if rumors are to be believed, it appears that LaBeouf may be contemplating a role as none other than a young Karl Rove.

Yes, it looks like Rove’s about to get the same treatment his old boss got. From the Los Angeles Times:

“Those close to LaBeouf have said that the actor is very interested in “College Republicans,” the comedy-drama about a young Karl Rove vying for the position of chief campus conservative under the guidance of one Lee Atwater, who’s his campaign manager. A lot of actors have expressed interest in either of the two lead parts — Wes Jones’ script, set up at “Beaver” producer Anonymous Content, has been a hot commodity in recent months and will likely end up high on the year-end Black List — and LaBeouf is said to be among the actors who wants in. (There’s officially no director yet, though Richard Linklater’s name has surfaced, which means the recently studio-minded LaBeouf would be working with one of the forefathers of the modern indie movement.)”

I think the movie sounds great and, more importantly, so does the casting. LaBeouf would be absolutely perfect. I mean, he’s already perfected his response in the scene where Rove is asked if the Republicans should ever compromise with Democrats.