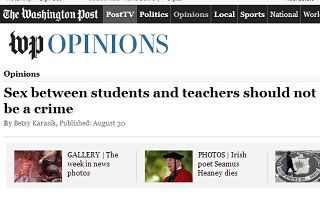 The Washington Post has accomplished the rare feat of publishing something that pretty much everyone can agree on, namely that op-ed writer Betsy Karasik should maybe stick to painting. Everyone from ThinkProgress to the conservative Newsbusters is flipping righteous sh*t over Karasik’s contention, summed up in her headline, that Sex between students and teachers should not be a crime, but they’re ignoring the best part of the piece.

I hesitate to quote any of Karasik’s piece, because there’s hardly a sentence in it that doesn’t present a real danger to children,and because of that, The Washington Post should immediately remove it. Opinions are one thing, inciting rape is another. Here’s one paragraph from the piece that gives you an idea of what she’s driving at, and why:

I’ve been a 14-year-old girl, and so have all of my female friends. When it comes to having sex on the brain, teenage boys got nothin’ on us. When I was growing up in the 1960s and ’70s, the sexual boundaries between teachers and students were much fuzzier. Throughout high school, college and law school, I knew students who had sexual relations with teachers. To the best of my knowledge, these situations were all consensual in every honest meaning of the word, even if society would like to embrace the fantasy that a high school student can’t consent to sex. Although some feelings probably got bruised, no one I knew was horribly damaged and certainly no one died.

The obvious point that Karasik is missing is that statutory rape laws aren’t just about a girl’s ability to consent to sex (most states’ consent laws take into account the age difference), but her ability to refuse consent. Her anecdotal romp through the seventies might have turned out differently if there had been a legal mechanism for extorting sex from students. Aside from her fantasy that underage girls are the real predators here, Karasik doesn’t seem to understand that sexual assaults are grossly under-reported, and even more grossly under-punished.

The best thing about Karasik’s op-ed, though, is that it tells you everything you need to know before you even get to the first word in the first paragraph, a rare feat for any piece of writing (emphasis mine):

Sex between students and teachers should not be a crime

Betsy Karasik is a writer and former lawyer.

Enough said. The Washington Post should now pay its readers the same favor that Karasik paid the legal profession.

Update: Betsy Karasik has written a response to this commentary, which I have agreed to publish here. She also notes that she did not write the original headline, which has been changed at her request. Rather than re-litigate the entire piece, I urge readers to check out the original, and consider the changes Karasik now says she might have made to it, and I will only say that I still fundamentally disagree with even her revised explanation, largely for the same reasons I enumerated above. Here is Betsy Karasik’s response, via email:

Since Mr. Cristopher felt the need to make such a major issue about the fact that I am a former lawyer, I note for the record that I was A.V. rated by Martindale-Hubbell (meaning the highest peer review rating for competence and ethics) until my retirement with no blemishes on my record. During my legal career I represented plaintiffs in medical negligence, product liability, unfair insurance claims practices, and civil rights litigation. My opinion here is very much informed by my extensive experience hand-holding clients for whom the pressure of litigation was extremely stressful and upsetting.

While I don’t doubt that his intentions and goals are, like mine, the health and well-being of young people, Mr. Cristopher has grossly and irresponsibly misconstrued my views. I was obviously taking a controversial position by advocating re-evaluation of two highly taboo subjects: whether sex between a student and teacher should always result in the case going into the criminal justice system, and the age of consent/statutory rape laws. But challenging accepted narratives about these topics should not result in the kind of facile and intellectually dishonest attack in which Mr. Cristopher indulged. His piece utterly misses the point, much like claiming that anyone who questions mandatory sentencing is promoting crime or that advocates of comprehensive sex education in schools are promoting promiscuity.

Mr. Cristopher states: “I hesitate to quote any of Karasik’s piece, because there’s hardly a sentence in it that doesn’t present a real danger to children” and then goes on to ignore every sentence in the piece which makes it clear that my one and only concern is protecting children and young people. It never occurred to me that the piece would be read so selectively. I think a fair reading makes it clear that my concern is for the welfare of the students/victims and that my ideas are coming from a place of pragmatism and compassion. I wasn’t surprised when Glenn Beck slammed me, but I was appalled to see the same reductive tactics and reactionary mindset embraced by journalists who call themselves progressives and feminists.

Mr. Cristopher claims that I am insensitive to the fact that sexual assaults are under-reported. To the contrary, my concern is that the fear of being embroiled in criminal proceedings drives too many these situations underground, and I specifically note in the piece that “[t]he indiscriminate criminalization of such situations may deter students struggling with sexual issues from seeking advice from a parent or counselor.”

I suspect some readers were troubled by my piece because I did not make it sufficiently clear that I was carving out an exception for consensual situations, not assuming most sexual activity between students and teachers to be consensual. It was shocking to me that some assumed I was suggesting decriminalization in the type of situation that occurred at Penn State. I was not in any way arguing that teachers who employ grooming, harassment and other forms of coercion should escape prosecution. One thing I do regret is that the piece was ambiguous in unpacking why I pegged it to the case involving Ms. Morales. I expressed “ambivalence” over her case, but I failed to sufficiently clarify that my ambivalence was not about whether the teacher should have been prosecuted, but about whether the criminal process may have traumatized her. (That was why I introduced the piece with the Louis C.K. remarks, which also address an unintended consequence of criminal laws.)

I was trying to convey that criminalization is a blunt instrument with unintended consequences and is not always the best way to deter behaviors we deem undesirable. Society learned this during prohibition and is currently grappling with these problems in the context of drug laws and mandatory sentencing. I was simply stating the obvious: sexual activity between students and teachers will continue to occur no matter how hard we try to suppress it with legislation. And some of these situations will include behavior that does not include force, coercion, manipulation, or other conduct that plainly should be subject to criminal laws.
I was suggesting that we could be responding to consensual situations in a more realistic and intelligent manner, and that forcing the student to participate in a criminal prosecution in these cases is likely to unnecessarily amplify the trauma to the student.

Of course, we aren’t just talking about the general population, but rather a situation where teachers are in a position of trust and authority over students. That is why I clearly stated that any teacher who has sex with a student, even if the sex is consensual and the student is above the age of consent, should be fired and lose their license. And I have also suggested a higher standard of proof for establishing that student-teacher sex is consensual, perhaps in the form of a rebuttable presumption of non-consent.

Some argue that because of the power differential there can never be meaningful consent in in this context. I disagree and I believe it is tortuous and hypocritical to label all of these situations rape. I do agree that any student-teacher sexual relationship should be subject to very careful scrutiny because of these concerns. I would rather see society devote resources to providing a thorough mental health and/or law enforcement evaluation on a highly individualized basis at this point to determine if there was manipulative or coercive conduct, rather than on indiscriminate prosecutions and repairing psychological harm after the fact.

In her book Harmful to Minors: The Perils of Protecting Children From Sex, (Univ. of Minnesota Press, 2002) Judith Levine states that “[m]any psychologists believe that adults’ reactions even to certifiable sexual abuse can exacerbate the situation for the child…” and quotes a report by the National Center on Child Abuse and Neglect stating: “There is often as much harm done to the child by the system’s handling of the case as the trauma associated with the abuse.” Even my most vocal critics in the victim/abuse survivor community concede that the criminal justice system is still rife with ignorance and incompetence, can be a brutal experience for victims, has a long way to go before it adequately supports survivors of abuse, and is not likely to change any time soon.

I was also arguing that the age of consent is unrealistically high. In the United States it is 18 in many states, and 16 or 17 in others. In most European countries it is between 14 and 16. When I said “extenuating circumstances,” I actually meant, and should have said, “aggravating circumstances.” When I said “not all sexual conduct between underage students and teachers should necessarily be classified as rape” I was referring to consensual sexual activity by teenagers who are underage within the current legal framework, but who would not be underage if legislators lowered the age of consent.

Again, this is not about promoting sexual activity, but rather realistically tailoring social policies, including how wide a net we wish to cast for criminal prosecutions. I have been thinking about the fact that, outside the school context, there would not always be disincentives such as job loss to deter adults from seeking out sexual relations with teenagers above the age of consent. But if the teenager is above the age of consent and the conduct is consensual, distasteful as it may be to contemplate that they are engaging in sex with adults, I still believe this is better addressed outside the criminal justice system, preferably through the intervention of parents and mental health professionals. This sentiment is supported by Ms. Levine’s extensive analysis of statutory rape, wherein she argues that “legally designating a class of people categorically unable to consent to sexual relations is not the best way to protect children … [c]riminal law, which must draw unambiguous lines, is not the proper place to adjudicate family conflicts over youngsters’ sexuality.” Id. At 88.

I strongly believe that forcing a teenager who has engaged in a consensual sexual experience to self-identify as a rape victim sends a hypocritical and damaging message to that individual and to society. While I blame myself for not making the piece clearer in certain respects, I am hugely disappointed that Mr. Cristopher has simply used the piece as an opportunity for self-righteous grandstanding as opposed to having the courage to actually address the more difficult and politically sensitive policy issues it raises. A media that can do no more than exploit low-hanging fruit to move from one sensationalized outrage to the next is doing society a huge disservice.