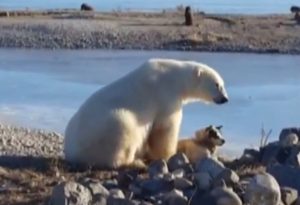 To maintain a sense of optimism going into Friday evening, leave this page behind and go back to yesterday’s post about a polar bear who petted a puppy. Stay there.

To plunge into the cold, sad reality of the real world , read on.

So, as you might have figured out by now, there was a video on this site yesterday that showed a polar bear with a dog. It was cute. Now, though, word has come forth once more from the Canadian Broadcasting Corporation that is not as cute. A polar bear in the very same area of Manitoba apparently ate a dog that belonged to the guy who also owned the one from the viral video.

Since the video gained traction yesterday, Canadian authorities have been looking into the activities Churchill resident Brian Ladoon, who runs a sanctuary for dogs and keeps them chained up outside near the polar bears. A Manitoba Sustainable Development official explained it like this:

Conservation officers had to immobilize a bear in that area last week and move it to the holding facility because it killed one of his dogs. A mother and cub were also removed because there were allegations the bears were being fed and the females’ behavior was becoming a concern.

In cases where someone is caught feeding endangered species such as polar bears, “failure to cease the action of feeding/baiting polar bears will result in further enforcement action” because “the protection of polar bears is of utmost importance and interfering with their natural behavior will not be tolerated.” The behavior of the polar bear in yesterday’s viral video definitely looks like the behavior of a bear that is being fed.

Ladoon didn’t seem to care. He explained that he takes care of the bears and has been “charged with everything…under the book” when it comes to the dogs at his Mile 5 Dog Sanctuary. He even charges tourists a fee and takes them out to look at the bears.

Ian Stirling, an adjunct professor at the University of Alberta, told the CBC that by keeping his dogs chained up, Ladoon makes them susceptible to attack. Chained dogs know that they are vulnerable and won’t bark, so they’re useless as guard dogs. Essentially, Ladoon is just leaving his dogs to be eaten. Stirling also cautioned that the relationship between the dogs and bears that was showcased in yesterday’s video is totally unnatural and would never happen in the wild. If the bears start to associate the dogs and people with food, they could invade other areas and be killed by locals, so it’s “a death sentence” for them to feed them.

Ladoon’s main concern was, uh, sort of similar in that he expressed frustration over the consequences of (not) feeding them.

“That was the only day we didn’t feed the fucking bears, the only night we didn’t put anything out,” he said of the night one of his dogs was eaten.