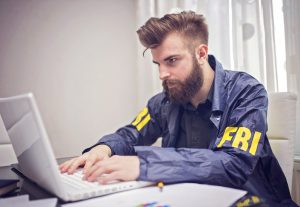 Clinton emails, DNC hacks, Trump’s ties to Russia… and now, the FBI has opened a new investigation into an entirely different target: the bureau’s own Twitter account.

The FBI is looking into the social media account that handles its archives (@FBIRecordsVault), ThinkProgress reported. The internal probe comes after the account awoke from a year-long slumber and began posting links to old case files related to the election in the final week of the campaign.

Many of the links suggest an apparent attempt to inject the news cycle with some negative publicity for the Clintons in the days leading up to Election Day.

It is against both federal law and FBI policy for the agency to try to influence the election.

William J. Clinton Foundation: This initial release consists of material from the FBI’s files related to the Will… https://t.co/Y4nz3aRSmG

The FBI said that the files were released following a FOIA request and were made public per standard procedure. But the decision to broadcast the release via a Twitter account that had not been in use for over a year was at the least curious.

[…] News of the internal investigation is at odds with the FBI’s official position, which is that the Twitter account followed all FBI procedures.

The WJC Foundation file was not the only election-related unearthing from the FBI’s records this week.

The @FBIRecordsVault account also posted a link on Sunday to the investigation into Clinton’s email server, back to back with a link to its probe into David Petraeus’s disclosure of classified information. Trump has frequently contrasted the findings of the two investigations and cited it as evidence of the FBI giving Clinton preferential treatment.

The account then posted multiple links to its collection of aerial surveillance footage of the April 2015 Baltimore riots that followed the death of Freddie Gray. Trump was vehement in blaming the president for the riots and has made lawlessness in cities a familiar theme in his campaign.

On Wednesday, the bureau’s file into the death of Vince Foster — for decades a lighting rod for Clinton conspiracy theorists — suddenly went viral, sending Foster’s name to the top trending topics on Twitter. Even though the files had been publicly available since May 2011, their “release” was reported as news by conservative outlet TheBlaze. The @FBIRecordsVault account did not appear to be connected to the renewed interest in the Foster case, and it’s unclear why it became widely shared Wednesday.

The account was also angling to throw some good vibes toward the GOP candidate: The very first tweet it posted on Sunday, signaling the end of the its dormancy, pitched Trump’s father as a “real estate developer and philanthropist.”