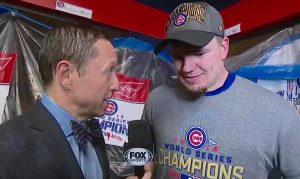 “You’re not gonna believe this,” Joe Buck said, as the FOX broadcast returned from commercial after the bottom of the ninth inning, and the Progressive Field grounds crew rolled the tarp across the outfield.

Without question, it was pretty difficult to fathom. A series with so many plot twists was about to take one more as the skies above Cleveland opened up, and the pause button was being hit on most dramatic sporting event in recent memory.

For 17 minutes, Game 7 of the World Series stood in recess. And with a nation in suspense, it was up to FOX’s production staff and eight-man broadcast team to chronicle these unprecedented, dramatic moments. It was on them to quickly summarize the remarkable events that just occurred, and to preview the historic events soon to come.

And at this crucial juncture, the network delivered, as they did all night. It was a broadcast worthy of the once-in-a-lifetime event being aired.

FOX deftly navigated the rain delay, starting with their dugout reporter Ken Rosenthal, who hustled to secure an interview with umpire crew chief John Hirschbeck — which got us the weather report we badly needed at that moment.

When the broadcast was tossed back to FOX’s studio quartet, they handled things with aplomb. The network has clearly found a winning combination with these four; The polished yet personable Kevin Burkhardt in the pilot seat. The stoic and commanding Frank Thomas as the straight man. The goofy but insightful Pete Rose as the wildest of wild cards. And the improbably remarkable Alex Rodriguez as the star of the show. Against all odds, A-Rod has a chance to be a sports broadcast figure on par with the likes of John Madden.

It wasn’t flawless, but then, neither was the game. (Burkhardt teased an interview with Cleveland manager Terry Francona that never came.) But the brief, impromptu banter felt like more than just filler. They criticized Cubs manager Joe Maddon for his use of closer Aroldis Chapman, and an ill-fated safety squeeze attempt in the ninth. And Rose was precient in pointing out that the Cubs had the heart of their batting order coming to the plate in the tenth.

The broadcast was thrown back to the tandem of Joe Buck and John Smoltz, who seemlessly picked up where they left off. Smoltz was solid in the analyst’s chair, bringing useful insights to the plate, and criticisms when warranted. He could use a slight infusion of personality, but his fundamentals are solid.

And then there’s Joe Buck, oft the target of social media vitriol. The son of the late, legendary St. Louis Cardinals announcer Jack Buck, Joe taken a ton of criticism over the years (much of it summarized here). Some of it warranted, some of it not.

Buck knows the rhythm of a baseball game as well as anyone alive. He knows when to talk, and more importantly, he knows when not to talk. He is smooth, knowledgable, and witty. He is a pro.

But this Ringer profile of Buck seems to confirm he’s gone Hollywood. That story informs readers that Buck is pals with actors Jon Hamm and Paul Rudd, and it contains the line “Over beers and lunch at his country club…” An everyman he is not, and that’s a fatal flaw for a baseball broadcaster. The very best in the profession — Vin Scully, Ernie Harwell, Jack Buck — were always able to connect with their audience in a highly personal way that Buck, until Wednesday, never had.

For one night, though, Buck felt less like a television personality, and more like a baseball-loving kid who’d learned the game at his father’s knee, and was now growing up right before our eyes. He brought the gravitas that the moment demanded. His eighth inning call of the Cleveland home run that tied the game was pitch-perfect. And so too was the final out, which felt unscripted and authentic.

It was the most important baseball game of his career. And Joe Buck rose to the occasion.

His father would’ve been proud.