The Internet Presidency: What Dirty Campaigning Looks Like Today

The Internet Presidency: What Dirty Campaigning Looks Like Today 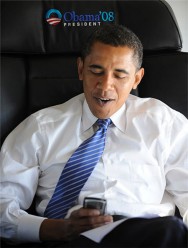 The 2008 election year and Barack Obama’s subsequent election have been described by many as the first Internet presidency: the viral Internet vids and election emails were used to great effect. Not to mention: This is the first president to carry a Blackberry! However this is all likely to be considered small potatoes in the very near future.

To get a sense of what we can expect in 2012 take a look at what just went down in Connecticut. Instead of misleading and/or vicious robocalls and fliers, political operatives in that state opted for Twitter. Or at least gave it their best shot.

Twitter, Inc., shut down 33 fake Twitter accounts created by Republicans using the names of Democratic state representatives. The Republican scheme was to send out posts under the Democrats’ names mocking the liberal tax-and-spend bastards.

As we’ve noted before, Twitter is pretty quick to shut down fake accounts, but try and imagine that on a national level — how many twitter accounts are there already that are variations on Sarah Palin’s name? Furthermore try and imagine the effect on a population of people not quite as Internet savvy as the people reading this post.

It doesn’t stop at Twitter — and neither apparently did the CT state Republicans.

Republicans are still operating the 33 Web sites they created using the names of those same Democratic lawmakers. As far as anyone knows, this is the first time any state party has used such a tactic to mock its state opponents.

It is for certain not going to be the last. The real Internet election year is yet to come.