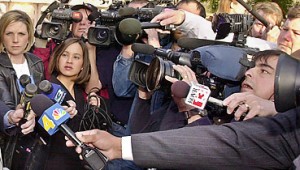 One of the beauties of the transfer of power from major media operations to individuals, bloggers and tweeters is that they — we — can all serve as a sort of fact-checking peanut gallery. So it’s hard to imagine that, in this day and age, the mainstream media could repeatedly misstate the holding of one of the most significant Supreme Court decisions without being roundly excoriated. Not a matter of opinion or a partisan viewpoint, but, simply parroting a mistake or lie about the holding in that crucial ruling.

I have followed the Court’s Citizens United decision particularly closely because my dad, Floyd Abrams, was one of the lawyers who argued it (for free, incidentally) in the Supreme Court, on behalf of Senator Mitch McConnell. Their challenge was to a part of the McCain-Feingold campaign finance law that barred corporations and unions from engaging in what they argued was classic political speech — producing and showing a movie on television that criticized a candidate for President and spending money for ads that support or denounce that candidate. They prevailed in a divided 5-4 ruling. Subsequently, and not surprisingly, the ruling became one of the most controversial opinions of our day, with many on the left denouncing the ruling as a fundamental threat to our democracy.

Let me say at the outset that I don’t entirely agree with the position my dad took in the case. He sought and got a broad ruling striking down major parts of the statute. In my view, the Court could and should have decided the case on far narrower grounds, thereby avoiding the need to overturn some past Supreme Court rulings (On a personal note, I have also been amazed at the vitriol directed at my civil libertarian father from the left over his defense of a constitutional principle he firmly believes in. Defend a Nazi’s right to march? No problem. Defend the most repugnant members of our society’s right to speak? Absolutely. Defend a corporation’s right to engage in the political process? Inexcusable). But my personal view on the nuances of the ruling is beside the point. This is about what the ruling said and didn’t say, what it did and didn’t do. And about how so many in the media keep getting the ruling and its impact dead wrong.

There are two media myths and inventions that are most commonly cited.

Wrong. The Court ruled just the opposite and upheld, by an 8-1 vote, the McCain-Feingold requirement of identifying donors.

Myth 2: That the Court’s ruling in Citizens United opened the door to wealthy individuals like Sheldon Adelson to pour millions of dollars into PACs.

Wrong again. The Citizens United ruling had NOTHING to do with the ability of individuals to spend their money to support candidates. That had been decided back in 1976, when the Supreme Court decided that the First Amendment protected the right of individuals to make unlimited independent expenditures supporting or opposing candidates for federal office. In Citizens United, the Court ruled that corporations and unions were entitled to the same rights. It wasn’t that long ago, after all, that the Swift Boat ads, legally paid for by individuals, soiled John Kerry during the 2004 campaign.

But reading the New York Times, Washington Post and watching MSNBC in particular, it is hardly surprising that the public would be confused. On January 9, in a front-page piece on the influence of Newt Gingrich supporter Sheldon Adelson, the Times inaccurately reported that Adelson’s $5 million donation to a pro-Gingrich SuperPAC “underscores” how the Citizens United case, “has made it possible for a wealthy individual to influence an election.” On January 14th, a column by Gail Collins asserted that, “all these billionaires would not be so worrisome if the Supreme Court had not totally unleashed their donation-making power in the Citizens United case.” The opinion, in fact, did nothing of the sort. I don’t know if it’s sad or just troubling that the Times issued two corrections on the earlier piece, including the year Citizens United was decided, but none on its repeated and major error about the ruling itself.

The Washington Post has done no better. On January 11th, Dana Milbank, writing of Adelson’s $5 million donation to a pro-Gingrich SuperPAC, asserted that it was, “the Supreme Court’s Citizens United decision which made such unlimited contributions possible.” And on February 5th, E.J. Dionne Jr. blamed Citizens United for permitting, “the brute force of millionaires and billionaires … to have their way.”  The Post published a letter from Floyd Abrams today highlighting the error, but without a formal correction.

It seems this faulty analysis has worn off on MSNBC host Chris Matthews as well, since he, too, regularly misreports the case’s ruling. “Under this new court ruling, Citizens United, your opponent can run a terrible campaign and relentlessly destroy your reputation without putting your fingerprints on the ad,” Matthews said. “You don’t have to say, ‘I’m Mitt Romney and I paid for this ad.’ So now in Iowa, where the people don’t like negative campaigning, you can run the bombing campaign or destroy your opponent without having your face or voice associated with it. That’s what Newt wasn’t aware of. It’s his fault that conservatives like them have gone along with these court decisions, that have allowed big contributors, wealthy people to put unlimited amounts of money into negative campaigns without putting the name of their favorite candidate in the ad.”

This is a double dose of wrong, since the disclosure requirement in the law was upheld and the case had nothing to do with individuals. One might forgive Al Jazeera for getting it wrong and it’s not unusual to see partisan advocates misstate a ruling like this to further a political agenda, but the mainstream American media should have no excuse.

NBC’s Michael Isikoff seems to have become the network’s Citizens United “expert,” since he addresses it in so many of his appearances. According to Isikoff, “the ‘independent’ SuperPACs –thanks to last year’s Supreme Court ruling in the Citizens United case — can collect unlimited amounts from wealthy donors and directly from corporations. This gives them the latitude to potentially spend even more money than the presidential campaigns themselves, which are still constrained by official limits of $2,500 per donor.” It’s true that Citizens United changed the law with regard to corporate spending, but the opinion did not change the law on an individual’s ability to “spend even more money than the campaigns themselves.” Before and after Citizens United, individuals could give unlimited amounts to outside groups. On January 10th, leading up to the New Hampshire primary, Isikoff and Reverend Al Sharpton engaged in a conversation on MSNBC, in which both men demonstrated a misunderstanding about the ruling by repeatedly talking about the supposed impact on the ability of wealthy individuals to impact elections.

Matthews: It seems to me, Michael Isikoff, that this is going to be message out
of Iowa, the power of these third party or SuperPACs, where you don’t have
to put the candidate’s name on it, you don’t put the names of the
contributors on it, the money is unlimited, and you can basically destroy
your opponent if you have got enough rich friends. Legal, right?

So is there any argument at all to support their claims? Not on the case’s impact on disclosure requirements. But on the effect on individual donors, the strongest argument is a sort of psychological one articulated by law professor Rick Hasen, who concedes that, yes, it is true that individuals could donate unlimited amounts before Citizens United, (he points out that George Soros gave $23 million to help John Kerry), but because a “legal cloud” hung over what were referred to as 527’s, some might have been reluctant to dump huge sums into them. Well, that hardly serves as cover for the myriad of journalists and media figures claiming as a matter of fact that Citizens United opened the door for the Sheldon Adelsons of the world.

This case has led to some heated dinner conversations in the Abrams household, but in the media that debate often appears to be based on a ruling that never occurred. How many times have I heard people wonder aloud how Citizens United could have treated money as speech? It didn’t. It held, as NYU Professor Geoffrey Stone pointed out in the Huffington Post, that when the government regulates money, “because it is being used to enable free speech it necessarily raises a First Amendment issue.” Can a corporation really receive First Amendment protection? The New York Times Company, The National Broadcasting Company and the Corporation for Public Broadcasting among many others, sure think so.

You may disagree with the opinion, you may think that expanding the ability of corporations to fund campaign messaging is a true danger, or just, as I do, that outside money is a major concern for our democratic system. But that doesn’t change the fact that the political chattering set ought to be far more concerned and outraged by the indolence, indifference or just bias, that has led to the widespread misinformation by the media about what the court actually considered and ultimately ruled.