This Exists: British Man Banned From Driving For A Year After Caught Talking On Two Phones In The Car 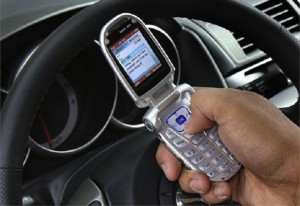 Case in point: a British man was pulled over by police officers for talking on a cell phone while driving, and simultaneously texting someone with another cell phone in his left hand. Police say he was swerving, possibly from steering with his knees. The man’s lawyer says he “had been reading a phone number from one phone to an acquaintance with whom he was speaking on the other device.” As you do.

Here’s what lawyer Simon Nicholls had to say in defense of his client:

“We hear about people driving while eating apples and doing all kinds of stupid things. He accepts he made a mistake and will learn from it.”

Okay. First of all, what right-minded person owns two cell phones? In what sick, twisted world do you need more than one cellular device to make calls and text people on? But more to the point, apples? Really?

It comes down to the discretion of the police and in the past a motorist has been fined for eating an apple while driving and feasting on a Kit Kat.

Give me a break, give me a break, break me off a piece of that criminal justice system! But our prolific cell phone user was found guilty not just for using his phone, but for reckless driving and not having the proper insurance. He was fined £165 and banned from driving for a year. Yet despite the somewhat harsh sentence, road safety groups are still voicing their outrage and calling the punishment “woefully inadequate.” Which is probably true.

In a perfect world, they would have taken one of his cell phones away. Seriously, who needs two?