This Town Celebrated Downfall of Communism with Urinating Lenin Statue

This Town Celebrated Downfall of Communism with Urinating Lenin Statue 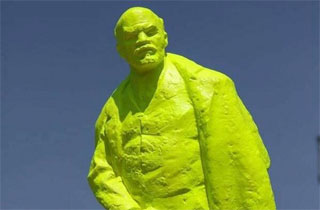 A Polish district in Krakow recently celebrated how awesome it is to not be communist by erecting a neon green statue of Vladimir Lenin urinating into a fountain.

The statue, entitled “Fountain of the Future,” depicts the Soviet leader gazing thoughtfully into the distance, envisioning a world where men can urinate equally as far as their fellow comrades. To compound its message, the artists placed the statue on a pedestal that formerly housed an actual Lenin statue.

There’s a little bit of backstory to why this district is so happy that communism is over: Nowa Huta, an industrial community, was built by the Polish post-war government specifically to “combat the influence of what authorities deemed to be ‘bourgeois’ Krakow,” according to the Independent. (The town was such a propaganda village that a popular song was written extolling its Socialist virtues, and was literally titled “This Song Is About Nowa Hute”.) However, the plan backfired and Nowa Huta instead became a hotbed of dissent, with protestors attempting to blow up the bronze Lenin statue at least twice.

And now that Socialist Realism is dead, everyone in Nowa Hute wants to keep it that way. Artist Bartosz Szydlowski told the Telegraph that he wanted the world to see the town’s sense of humor, and also wanted to stir debate over what should take the place of the statue.

[The Independent]
[Image via Hassan Kassem]