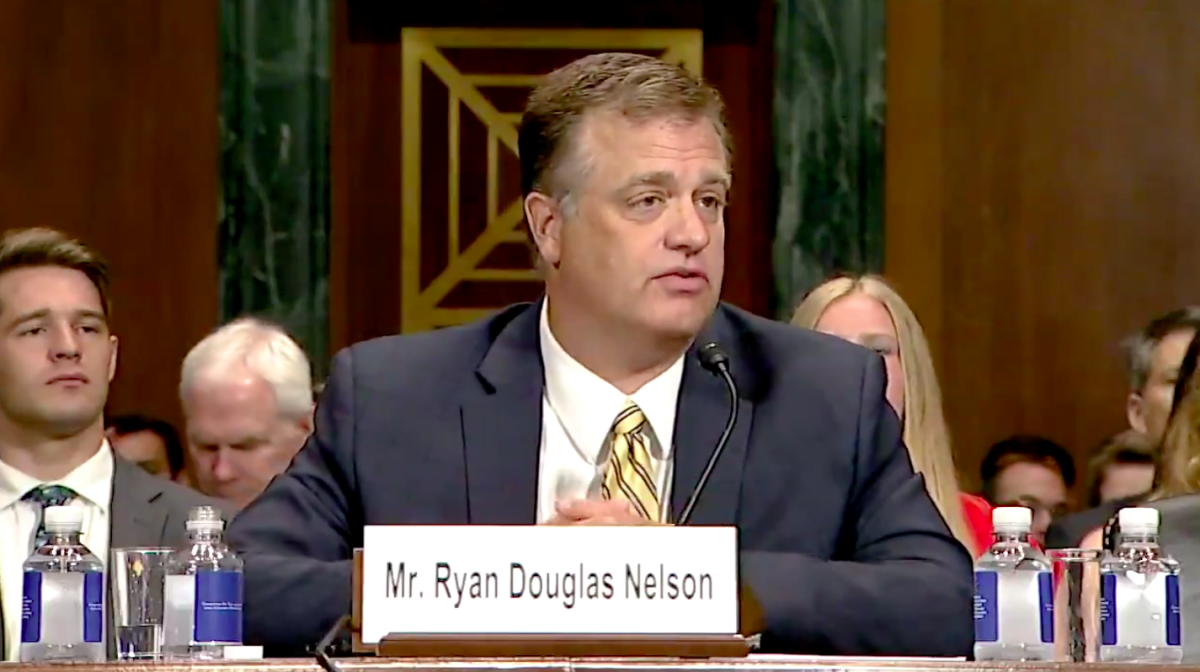 Attorney Ryan Nelson, President Donald Trump’s nominee to the U.S. Court of Appeals for the Ninth Circuit, worked as an attack dog against the press for GOP mega donor and billionaire Frank VanderSloot.

Since 2009, Nelson — whose nomination was advanced by Republicans on the Senate Judiciary Committee on Thursday — has worked as general counsel for Melaleuca, a health and wellness company owned by VanderSloot. During his time with Melaleuca, Nelson issued legal threats against reporters and news outlets at the behest of VanderSloot, who sources said uses legal intimidation to mitigate negative press coverage.

One source with knowledge of the legal threats and actions against journalists who report on VanderSloot described Nelson as a “mini-Charles Harder,” a nod to the lawyer who represented Hulk Hogan in his lawsuit that bankrupted Gawker out of existence.

Another source who spoke to Mediaite about the matter was on the receiving end of a legal threat from Nelson for their reporting. They chose to remain anonymous out of fear of legal retaliation, but described Nelson’s ascension to a top judicial position as “a terrifying threat to reporters and the First Amendment.” His job for VanderSloot, they said, was to “threaten and bully journalists trying to cover” the Idaho billionaire.

The most notable of the Nelson-led lawsuits against the media was VanderSloot’s battle against liberal magazine Mother Jones, which lasted from February 2013 to October 2015.

VanderSloot sued the outlet over a 2012 article by Stephanie Mencimer and a tweet from then-editor Monika Bauerlein about their story. The article covered alleged anti-gay activism by the billionaire and noted his company’s $1 million donation to Mitt Romney’s super-PAC.

VanderSloot’s activism includes a 1999 effort to cancel an Idaho Public Television documentary — by taking out ads against it — because it covered how teachers handle LGBTQ issues among young students.

Six years later in 2005, the billionaire bought ads in Idaho Falls’ Post Register criticizing the paper and its reporter Peter Zuckerman over a story on local Mormon faith leaders who knew that a pedophile led a Boy Scout troop sponsored by the church, but failed to intervene. For obvious reasons, the piece reflected negatively on the Mormon church, of which VanderSloot is a member.

The ads VanderSloot took out in response to the report noted that Zuckerman is a gay man who once wrote “it is very difficult for him to be objective on things he feels strongly.” While Zuckerman had mentioned his sexuality in writing as a student, his boss at the Post Register said the he “was not ‘out’ to anyone but family, a few colleagues at the paper (including me), and his close friends.” VanderSloot’s ad, the editor claimed, publicly outed the reporter to a community that he did not willingly out himself to.

“There was an immediate and dramatic impact in my life, which I believed was directly tied to the publication of the ad and was like nothing I’d experienced before. By outing me in my own newspaper (and linking my orientation to an attack on my integrity as a reporter), the ad profoundly affected my daily life as well as my professional reputation,” Zuckerman said of his experience after the ad was published. “I was ‘outed’ because of the ad—a large audience, if not most people I interacted with in Idaho, found out I am gay because of the ad.”

Fourth District Judge Darla Williamson tossed out VanderSloot’s case against Mother Jones in 2015 and ruled that the outlet and its staff never defamed the billionaire. The judge stated that the magazine’s reporting on VanderSloot was “substantially true” and noted that parts of the piece the plaintiffs took issue with were protected under the First Amendment. Williamson did criticize Mother Jones for writing with a “non-objective bias.”

VanderSloot responded to the ruling by forming a $1 million fund called the Guardian of True Liberty, to help conservatives sue news organizations.

Despite the controversy surrounding the case and claims of anti-First Amendment legal action, when responding to a questionnaire from the Senate Judiciary Committee, Nelson listed the Vandesloot vs. Mother Jones lawsuit as one of the top ten “most significant” cases that he has handled personally.

When contacted by Mediaite for comment on the Nelson nomination, former Mother Jones co-editor and current CEO Monika Bauerlein, who was named in the VanderSloot lawsuit, said: “This nomination certainly seems consistent with the White House’s hostility toward a free, independent, and fearless press, and I hope that as a judge, Nelson would recognize the key role of the First Amendment as a core tenet of our democracy.”

Nelson did not respond to Mediaite’s requests for comment.

Nelson’s nomination process is quickly moving ahead, as he advanced out of committee today, meaning a Senate confirmation vote for his lifetime appointment can come up whenever Senator Mitch McConnell schedules it.

His nomination has not come without opposition, however.

“Mr. Nelson is a conservative ideologue who has advanced a right-wing policy and litigation agenda throughout his career,” the organization stated. “He should not be confirmed to a lifetime appointment on the Ninth Circuit, which covers nearly three-quarters of U.S. public lands and which is charged with resolving many significant environmental matters arising in the American West.”

Specifically, the civil rights group disapproves of Nelson’s work against environmental protection and disabled people’s rights, as well as his lengthy history as a member of the Federalist Society — a conservative legal group that has aided in the Trump administration’s judicial nominations — and his role in the Bush administration.

Incidentally, Nelson’s ties to FedSoc randomly came up during his confirmation hearing after he accidentally referenced the group when trying to cite the Federalist Papers. He was quickly called out by many for the mistake, including Democratic Senator Sheldon Whitehouse who called it a “freudian slip.”

Of course we already knew that the latter matters more to the #GOP if you want a spot on the federal bench. pic.twitter.com/kYnNuiQlZX