Trump Goes on Tirade Against NH Paper, Tosses It Into Crowd: ‘Piece of Garbage’
video

Trump Goes on Tirade Against NH Paper, Tosses It Into Crowd: ‘Piece of Garbage’ 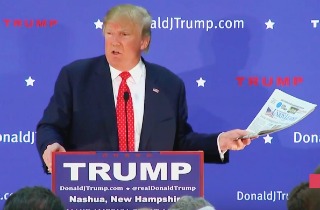 It’s a day ending in y, so naturally, Donald Trump is feuding with the media. Only this time, he’s fighting with a conservative-leaning New Hampshire newspaper over an editorial comparing him to Biff Tannen in Back to the Future Part II.

New Hampshire Union-Leader publisher Joseph McQuaid ran an editorial today saying that while Trump is good at driving PC people insane, he’s “a crude blowhard with no clear political philosophy and no deeper understanding of the important and serious role of President of the United States than one of the goons he lets rough up protesters in his crowds.”

Trump fired back during an interview with a New Hampshire TV station today calling McQuaid “a real lowlife” and “a very dishonest man.” He claims that he’s done a bunch of favors for McQuaid and the only reason he’s turning on him now is because he refused to participate in the Union-Leader‘s August candidate forum.

He also accused McQuaid of colluding with Chris Christie, which McQuaid dismissed as ridiculous.

But at a New Hampshire rally tonight, Trump really unloaded on McQuaid, basically implying he’s disloyal because he asked Trump for all these favors in the past that Trump complied with. He even claimed that McQuaid asked him to tweet that Christie should be on the main stage of one of the debates.

He called McQuaid “Christie’s lapdog” and ended his 14-minute rant by throwing a copy of the paper into the audience and saying, “Piece of garbage.”