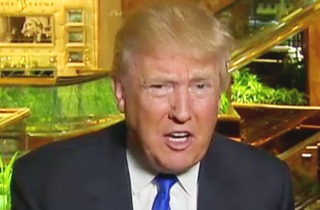 If this weekend was any indication, 2016 GOP presidential hopeful Donald Trump won’t be backing down from his various comments about Mexico and illegal immigration anytime soon. Hell, even his own adviser is defending the talking point in interviews. Immigration has become his ticket’s primary platform — and it’s sadly working (at least at the early polls).

So how could Trump possibly add to the already raging fire that is his candidacy’s developing foreign policy? If the words “olive branch” occurred to you, then you’d be very, very wrong. At least, that’s according to reports from a speech Trump gave in Los Angeles, where he allegedly said “we should have invaded Mexico” instead of Iraq.

Of course, these are merely allegations. It’s Trump’s supposedly approved (since they still haven’t been deleted yet) tweets about escaped drug lord Joaquin “El Chapo” Guzman that are shedding some light on his apparent beliefs about our neighbor to the south.

First, he dropped this bombshell duo on Sunday night:

Can you envision Jeb Bush or Hillary Clinton negotiating with ‘El Chapo’, the Mexican drug lord who escaped from prison? ….

Then, he went on to further outline what he thinks everybody else would do with Guzman:

The U.S. will invite El Chapo, the Mexican drug lord who just escaped prison, to become a U.S. citizen because our “leaders” can’t say no!

But the icing on the cake came Monday morning, when Trump’s volatile stance against Mexico adopted El Chapo as its piñata:

El Chapo and the Mexican drug cartels use the border unimpeded like it was a vacuum cleaner, sucking drugs and death right into the U.S.

….likewise, billions of dollars gets brought into Mexico through the border. We get the killers, drugs & crime, they get the money!

When will people, and the media, start to apologize to me for my statement, “Mexico is sending….”, which turned out to be true? El Chapo

I’m still undecided which party this paints a worsening picture of — Trump himself, or the registered voters who’ve repeatedly chosen him in recent national polls.