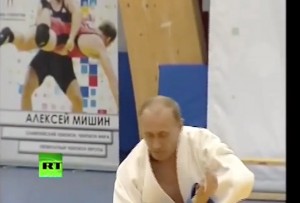 Some people see Vladimir Putin as a president. Some see him as a dictator. Donald Trump has defended him a few times and in turn, he has supported Trump’s bid for the presidency. Jake Tapper has come for Trump over his seeming praise for Putin, Fox News has made sarcastic jokes about it, and presidential candidate John Kasich even created an entire video tribute to their perceived friendship. Obviously, there is a relationship there, even if it is small.

So, why, then, did Trump release an ad that is ostensibly anti-Putin today? Video of Putin engaged in MMA-style combat plays before an ISIS soldier was seen pointing a gun at the camera. The text of the ad reads, “When it comes to facing our toughest opponents, the Democrats have the perfect answer…” Then, inexplicably, it shows Hillary Clinton‘s infamous “barking.” (Recall that she was mocking what she saw as the untrustworthiness of Republicans, not offering up any solutions to fighting “our toughest opponents,” so the ad makes very little sense in context.)

Is this what we want for a President?

The odd choice to attempt to tie Clinton’s arf arf arf to foreign policy notwithstanding, the ad is confusing because Trump has not publicly condemned Putin, let alone referred to him as one of our toughest opponents. The 10-second ad’s release on Instagram compounds the confusion because there is no supplemental information provided; there is no caption, no explanation.

Watch above to see Trump’s ad, which includes Putin laughing after Clinton barks.