On Wednesday, Washington Post writer Greg Sargent tweeted out a link to his article on the feud between LaVar Ball and President Donald Trump, with the caption: “Trump regularly attacks high-profile African Americans to feed his supporters’ belief that the system is rigged for minorities”:

Trump’s rage-tweets about LaVar Ball are part of a pattern.

Trump regularly attacks high-profile African Americans to feed his supporters’ belief that the system is rigged for minorities:https://t.co/vlWbUj10T2

As of writing, Trump’s tweet has yet to be deleted.

Sargent’s article, which is linked to in his tweet, is fiercely critical of Trump, and accuses him of targeting African American athletes “not just to ‘stoke the culture wars,’ as this euphemism often has it — but, more precisely, to stoke the sense among many of his supporters that the system is unfairly rigged on behalf of minorities, and that he’s here to put things right.”

Trump has come under fire recently for his repeated attacks on African American athletes, from NFL players kneeling during the national anthem to protest injustice (he’s bashed them as “privileged”) to the UCLA basketball players recently freed from Chinese prison (he all but demanded their gratitude for working to release them, and called LaVar Ball “ungrateful” for his response to the debacle.)

It is not clear what about Sargent’s view that Trump deliberately stokes racial division is MAKING AMERICA GREAT AGAIN! (Freudian slip, perhaps?)

Either way, when Dan Scavino finally wakes up to this Thanksgiving morning horror, and deletes the president’s tweet, here’s a screenshot for posterity: 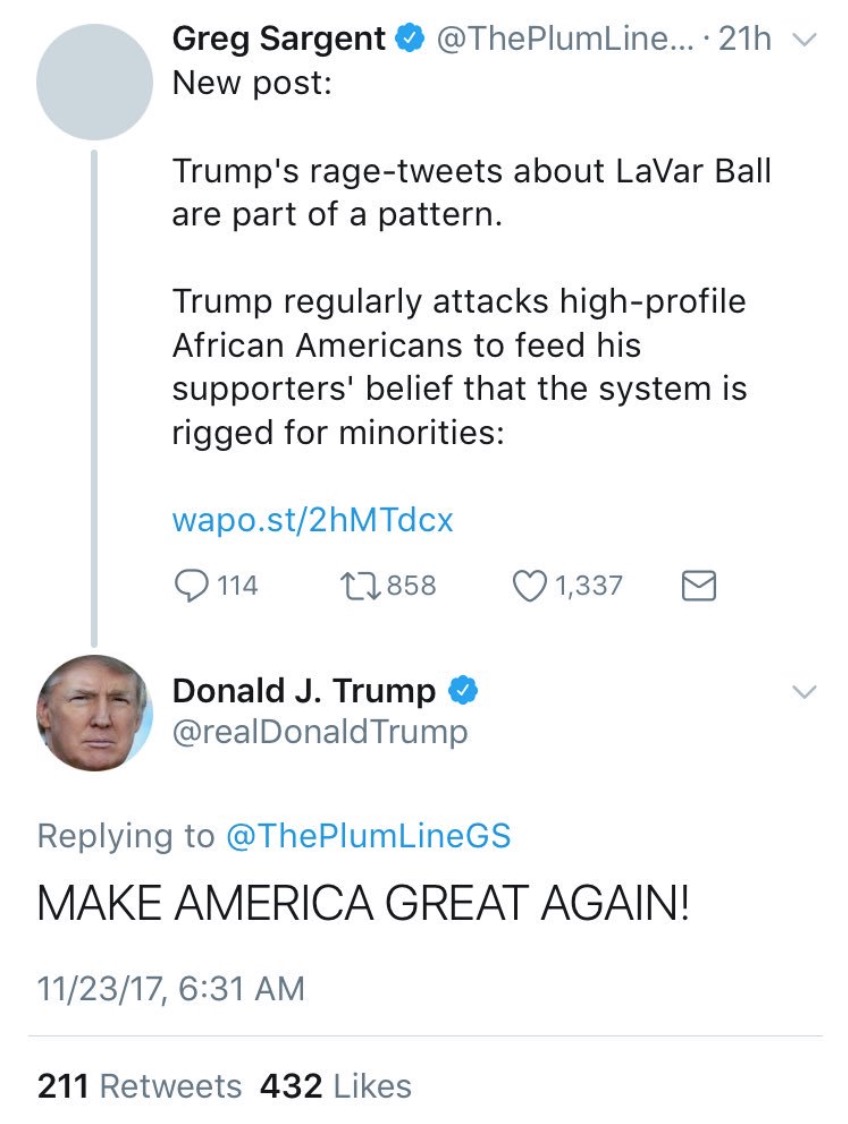 UPDATE 7:47 a.m. EST: Phillip Bump, Sargent’s colleague at the Post, has a theory:

Thanks for checking out Post reporting, Mr. President. pic.twitter.com/FooGhLATVS