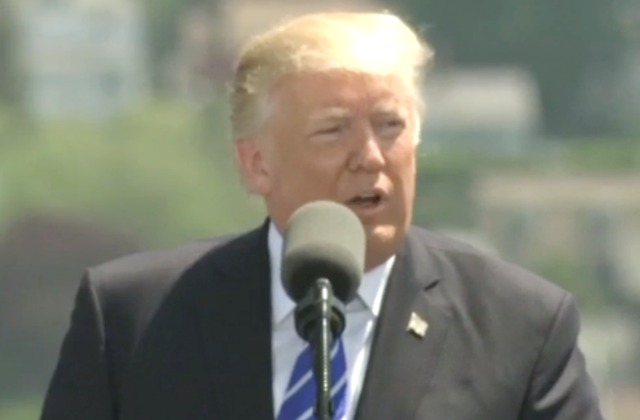 This morning, President Donald Trump once again started the day with some Twitter action. Spending the weekend with his family at Camp David, the president began Father’s Day by tossing out three tweets that touched on an outlier poll and his agenda in the face of the “Witch Hunt” Russia probe.

The MAKE AMERICA GREAT AGAIN agenda is doing very well despite the distraction of the Witch Hunt. Many new jobs, high business enthusiasm,..

The new Rasmussen Poll, one of the most accurate in the 2016 Election, just out with a Trump 50% Approval Rating.That’s higher than O’s #’s!

One thing he did not mention during his early morning missives, however, was the tragic news that the seven missing sailors from the USS Fitzgerald were found dead last night in a flooded compartment. The bodies were found after the ship had returned to its base in Japan.

Trump had tweeted about the Fitzgerald and the then-missing sailors yesterday morning, offering up “thoughts and prayers” for them and their families.

Thoughts and prayers with the sailors of USS Fitzgerald and their families. Thank you to our Japanese allies for their assistance. https://t.co/d1l5ctjNyB

Yet, so far, no mention of anything via Twitter following the announcement of their deaths, even though it has been publicly known since last night and, as president, Trump had found out about the news before it was released.