Trump Supporter Tells Reporters ‘Hillary Needs To Be Taken Out’ 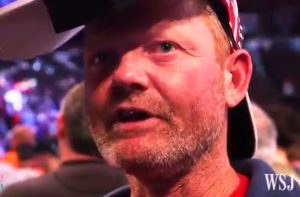 In an interview with The Wall Street Journal, a Donald Trump supporter at an Ohio rally alluded to the need to assassinate Hillary Clinton if she won the presidency, calling it his duty as a “patriot.”

“I feel like Hillary needs to be taken out,” said a rally-goer named Dan Bowman. “If she gets in the government, I’ll do everything in my power to take her out of power. If I have to be a patriot, I will.”

“What does that mean?” WSJ asked.

“Take it any way you want to take it,” Bowman responded enigmatically.

“I’m a patriot,” he responded.

“Is that a physical threat?” WSJ pressed.

The Boston Globe‘s Matt Viser also encountered Bowman, and reported on even more troubling comments.“If she’s in office, I hope we can start a coup. She should be in prison or shot. That’s how I feel about it…” he said. “We’re going to have a revolution and take them out of office if that’s what it takes. There’s going to be a lot of bloodshed.”

Viser said on CNN that Bowman’s rhetoric was widespread at the rally he attended and that Trump himself deserved some of the blame, noting his comments that only “Second Amendment people” could stop Clinton.  “That language is sort of leading at least some of his supporters to sort of engage in some of the violent rhetoric,” he argued.

Watch above, via CNN and WSJ.