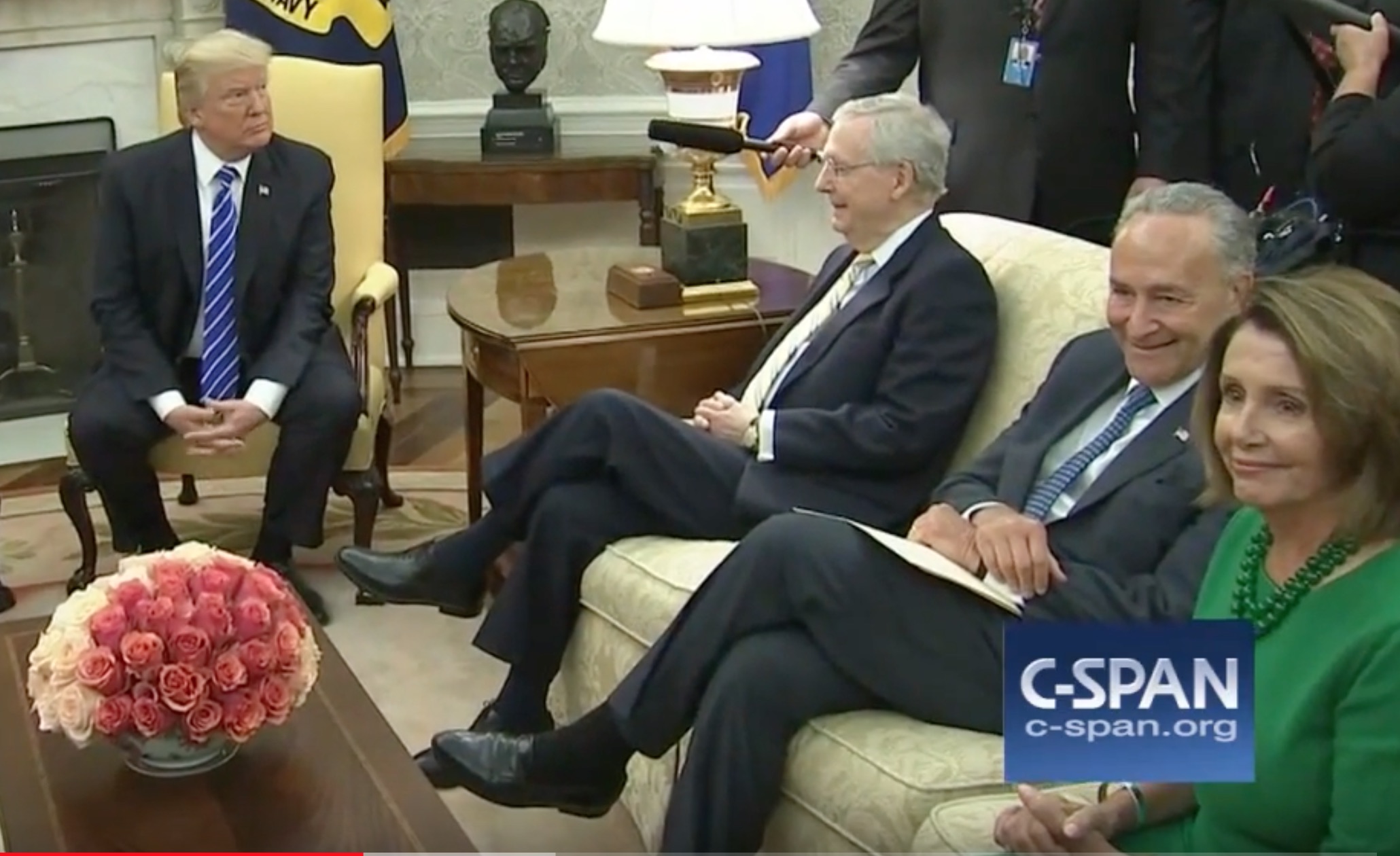 Basically, the two leading Democrats came to an agreement with Trump which would provide protections for DACA recipients while agreeing to border security measures that won’t include a wall:

And, considering the implications of this deal — NO WALL and DREAMers getting a pathway to citizenship — you just knew that the internet would blow up.

First off, knowing how the president would look like he caved to Chuck and Nancy again, the White House released a statement denying that the wall was taken off the table:

While DACA and border security were both discussed, excluding the wall was certainly not agreed to.

The President made clear he would continue pushing the wall, just not as part of this agreement. https://t.co/KD1SdLAnIF

Meanwhile, we got a wide range of reactions from the rest of Twitter:

Out: Trump threatening to shut down government over wall funding
In: Trump letting Pelosi/Schumer write immigration and spending bills

Welcome to what can happen if @realDonaldTrump steps outside himself – this is a good deal for the country. https://t.co/eUt7C0IqIr

TRUMP: I will build the wall and Mexico will pay for it!

TRUMP: I will build the wall (with taxpayer money)

Art of the Deal, by Chuck and Nancy! https://t.co/hRe4Y7ttXJ

Joe Walsh wasn’t happy. At all.

Trump just screwed his base.

And Chris Cillizza gave us a very Cillizza take.

Any chance McConnell or Ryan knew about this is advance? No way, right? https://t.co/OayIvICtzD

We also got some relevant GIFs showing how Trump got rolled by PElosi and Schumer again:

Not sure how this footage of Pelosi and Schumer’s meeting with Trump got leaked but wow: pic.twitter.com/84Kks2Hh49

And then, of course, there was the MAGA crowd — and you can guess how they felt:

@RealDonaldTrump If AP is correct, Trump base is blown up, destroyed, irreparable, and disillusioned beyond repair. No promise is credible. https://t.co/uJjxk6uX5g

Trump tells his audience what they want to hear. He told 63 million who voted for him he'd build a wall. Get used to it, Chuck & Nancy. https://t.co/UuxYFLLpok

Weak R's have betrayed voters. @POTUS needs to stay the course and keep his promises or it's over! Pelosi and Schumer can never be trusted. https://t.co/ky0NWvZoBv

As Chuck Schumer did with Bubbles Rubio, he is trying to make @realDonaldTrump his bitch.
Mr. President, are you Chuck Schumer's bitch??

.@realDonaldTrump will lose his base if he goes down this road. And I don't want to hear "4D chess" nonsense. This is bad. #BuildTheWall https://t.co/qzsrFOGgms