Twitter is Divided Over Sanders-Acosta Briefing Meltdown: ‘Everyone is Awful’

Twitter is Divided Over Sanders-Acosta Briefing Meltdown: ‘Everyone is Awful’ 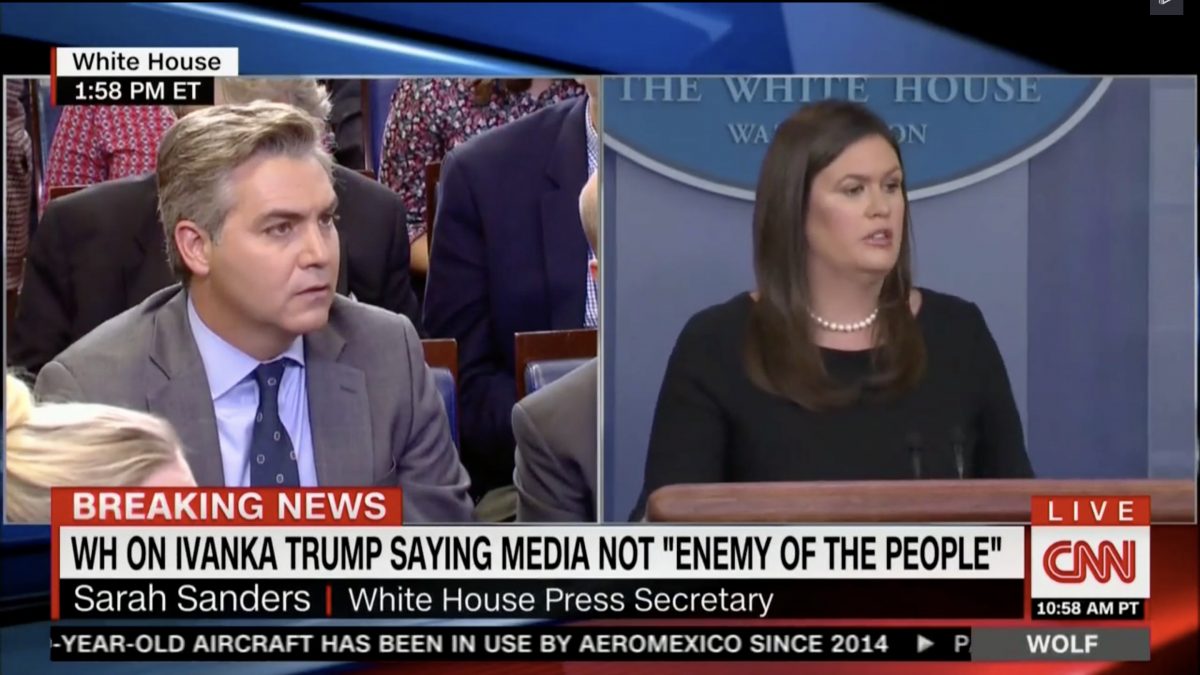 Just two days after being shouted down at a Trump rally in Florida, CNN’s Jim Acosta confronted White House press secretary Sarah Sanders during the briefing and called for her to say that the press was not the enemy of the people.

The clash between the White House reporter described by S.E. Cupp as “one of the president’s favorite human punching bags” and Trump’s press secretary during Thursday’s briefing almost immediately drew a strong reaction on Twitter, many who were quick to take sides in support of either Sanders or Acosta’s line of questioning.

Sarah Huckabee Sanders is magnificent. Look up her answer to Jim Acosta on whether the press is the "enemy of the people."

It is not Sarah Sanders’ job to answer opinion questions from Jim Acosta or anyone else. Her job is to provide information. CNN is distorting the job of the White House spokesperson. Period.

No Spin analysis on https://t.co/fqUvO5EEW0.

Remarkable & Shameful. WH Press Secretary Sarah Sanders refuses to unequivocally state that the press is NOT in fact the enemy of the people. pic.twitter.com/hmk1IiVUVq

It’s like a bad high school play. Everyone is awful. The drama teacher grimaces. The audience applauds and wants to go home and watch @SportsCenter https://t.co/ixIVdVpOt1

Perhaps the press needs to affirm whether or not the *people* are the enemy of the press. You know, the people who are tired of being maligned as racists because they didn’t vote for Hillary or called murderers on networks because they support self-defense. https://t.co/64pqzS5WHj

An extraordinarily disappointing moment by @PressSec just now… Her inability to acknowledge the role POTUS has played in all of this media bashing only hurts her own credibility…She had a chance to defend the institution and take the high ground and show leadership, instead..

Others such as Playboy’s White House reporter and CNN political analyst Brian Karam noted that while Sanders didn’t say the press was not the enemy, she did take time to give her “laundry list of slights.”

One of the most disengenuous events I’ve witnessed. @Acosta asked repeatedly about us being the enemy of the people and SHS repeats a laundry list of slights and her need for SS protection. 5 dead in Annapolis.

But she did spend a minute airing grievances she had against the press. https://t.co/S5nf9ceEWd

CNN’s Keith Boykin noted, “Donald Trump said a black Congresswoman had a “low IQ,” called a black TV anchor “dumb as a rock,” and said a white female anchor was “bleeding badly from a face-lift,” but Sarah Sanders blames the media for lowering the level of conversation in America.”

Donald Trump said a black Congresswoman had a “low IQ,” called a black TV anchor “dumb as a rock,” and said a white female anchor was “bleeding badly from a face-lift,” but Sarah Sanders blames the media for lowering the level of conversation in America. pic.twitter.com/zKRgQUlINg

This lady is a bad person. https://t.co/mIMugdSnrP