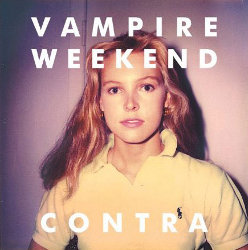 Pitchfork teased their review of Vampire Weekend’s new album, Contra, by calling the band “divisive,” but one look at the comments section of the A.V. Club’s review makes Pitchfork’s description sound tame. While it’s news to no one that blog comment sections can get testy, A.V. Club commenters took it to an unusual (and NSFW) level here.

The first sign of the intensity of opinions surrounding the band is that the day-old review already has more comments than a week-old write-up on a live album by the legendary Tom Waits. Still, the comment deluge started with an innocent enough dissenting voice, who said the album “really didn’t do it for me.” A bit later, though, we get the first reference to Vampire Weekend as “white sissies,” which elicited this response:

Besides Mastodon and TV on the Radio what music does the AV club review that isn’t made by white sissies? Don’t say rap because you’re all just pretending to like and relate to that you gentrifying, yuppie f—s.

That last, dashed word appeared an awful lot in this comment section, as it did in this harangue:

Lots of you probably dislike something I love. I don’t give a flying f—. What I do give a f— about is you ponces casting aspersions at people who disagree with you. I don’t like it because I feel I shouldn’t like it? Grow up and look around you. Taste is subjective.

The “white people music” angle was a popular topic:

as a white person, I am sooo uptight. That’s why I love Vampire Weekend! They appeal to my in-born predilection for cardigans and scarves, while allowing me to let me hair down just a little. Finally, negro music for us whites!

Most of these comments have sparked debate about VW’s image and not the music. Never before has there been a band that has received such vitriol over their perceived image, a straw man for detractors to distract themselves from enjoying a pretty good band.

“‘That guy'” doesn’t require quotes, unless you’re quoting someone else saying “that guy” you ignorant son of a bitch.

There are those personal attacks! And there’s plenty more good, old-fashioned hate for the album itself:

This album is f—ing terrible! Everyone involved in it’s [sic] production should be slapped publicly. Their debut was amazing, and sneakily one of my favorites. This however is s–t, no two ways about it.

But wait! More hope for sanity:

Jeezum, folks. It is possible to dislike this music on its own merits.

The only thing worse than a rock critic is an amateur rock critic. I hope you all die in a fire.

AV Club is naturally going to review music that appeals to the writers and the readership. I would assume that a great majority of us are probably sissies and some of us may be white. Liking rap doesn’t make anyone gentrifying any more than liking independent rock automatically makes someone a hipster, a douce [sic], a sissie or white.

That being said, Vampire Weekend can lick my taint.

Many were irked by comparisons of Vampire Weekend to the Talking Heads:

these pretentious fucks from vampire weekend and the dirty ass-projectors will never right [sic] a song that comes close to being as good as psycho killer. I agree with Talkingstove. If these two bands are to talking heads what the shitty beatles are to the beatles

…but most certainly seemed irked by something:

F— the haters. If you cannot find anything enjoyable about this band, then what the f— do you enjoy? VW is one of the only indie “pop” bands that’s actually catchy. Sure, they’re not the Dirty Projectors, but then again, who is? You’re probably the same f—ers that hate Wes Anderson, right? God damnit. Enjoy something you heartless pricks, enjoy it.

And I meant the f—ing Talking Heads, not the f—ing Dirty Projectors. You douchebags have me all in a hussy. You f—heads.

And I don’t even know what I mean by hussy. I just know that’s what I’m f—ing in.

Yes, it is very likely that there’s some tongue-in-cheek element to the above, but still…that’s a lot of f—ing…and a lot of craziness on the part of many. Lest the discussion’s occasional level-headedness go under-reported, however, we’ll give this comment the last word:

Man, I am stunned by the massive amount of both love and vitriol that these guys generate. Haven’t heard their latest, but found their other record to be perfectly fine, but relatively forgettable. Certainly a far cry from the Talking Heads.

Then again, I’m more of a jazz nerd than a pop nerd so what the f— do I know?

Ahhhhh. Serenity. But for those of you who enjoyed all the cursing, don’t worry – we’ll be back with more around 2012, when Vampire Weekend’s third album backlash crashes the entire Internet.