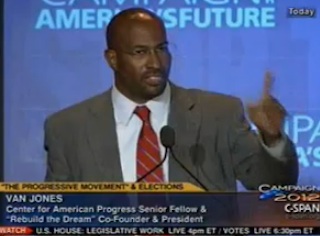 Former green jobs adviser Van Jones tore into the Keystone XL pipeline during a barn burner of a speech at the Take Back the American Dream conference on Monday and rallied young environmentalists for their victory over dirty energy, reports The Washington Examiner‘s Joel Gehrke.

Despite Mitt Romney‘s vow to build the Keystone Pipeline himself If necessary, Jones slammed the GOP for trying to shove it down America’s throats.

Jones also noted that the GOP had called upon the EPA to be wiped out. “The EPA, which has probably saved more American lives in the past 30 years than even the Department of Defense. The EPA which is keeping the poison out of our childrens’ bodies.”

Jones added that activists need to continue their success so that “the Rodney Kings of today like Trayvon who are victimized by racial fights dont have to fight alone.”

Watch Jones tear into the GOP and the Keystone Pipeline below via C-SPAN: