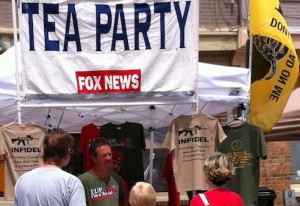 The liberal blogosphere is all aflutter about the “Yup. I’m a Racist” t-shirts that were on sale at a July 3 Tea Party event in Lexington, Kentucky. Wonkette takes the shirts as “A-HA!” proof that Janeane Garofalo was right all along, while Dave Weigel helpfully explains that, like that 2008 Spartacus-style anti-healthcare “PSA,” the shirts are meant to be ironic, and presents a video interview with the vendor from last year’s event. Fair enough. Is the “Everything I Need to Know About Islam I Learned on 9/11” part of the brilliant meta-humor?

The issue of race and the tea Party has been handled with the grace of a Joe Cocker dance-off, with opponents tarring the entire movement based on the actions of a relative minority (and the inaction of those surrounding them), while the Tea Party has responded with denial, and tone-deafness about its own lily-whiteness. Oversold accusations of racism shut down legitimate debate about why the Tea Party appeals to so few black people, while “ironic” moves like the shirts and the “I’m a racist” ad belittle legitimate concerns.

The t-shirt, for example, includes a Top Ten Straw Man Arguments for why some accuse the Tea Party of racism, including gems like “I support Jesus Christ as my savior,” a curious inversion of that relationship. The shirts might have some resonance if they included things like, “Because some knuckleheads dressed the President as a witch doctor,” or “Because most of us are white…just like a Code Pink rally.”

They would also make more sense if they weren’t hung next to those hateful “Infidel” shirts, and their wit might gleam a little brighter if not for the bumper sticker which asks, “What Does God And Obama Have In Common?”

The Louisville Independent Examiner‘s Greg Skilling interviewed the t-shirt vendors at last year’s Louisville event, and despite an apparent allergy to the wide shot, gave them a chance to explain their side of the story. Along the way, he makes a few strong points about mixing religion and guns, and selective concern about border seciurity:

Conservatives do themselves no favors in coddling the gun-crazy, nativist element of their base. Most serious-minded conservatives see comprehensive immigration reform as an inherently pro-business position, but dare not say so out loud, and their zero-sum attitude toward gun control is at odds with public opinion and current events.